This Is What The Future Should Look Like: Jacque Fresco’s The Venus Project 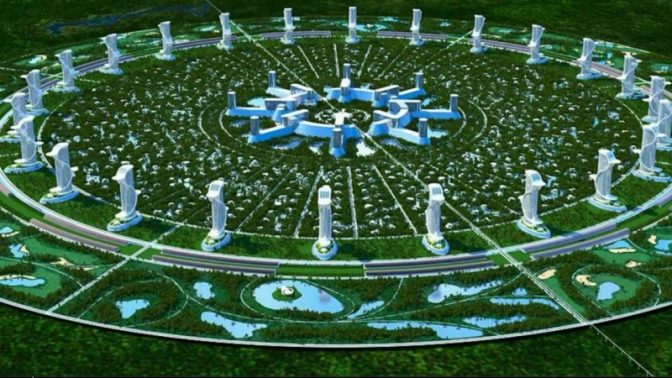 (Editor’s Note:  The title is the writer’s perspective, New Earth Nation does not comment on whether this should be the future, but I personally think it would be one of many possible routes that could be very positive for our planet.  Form your own opinion as a sovereign individual.)

*This article is taken from CE Magazine’s July issue, be sure to check out the issue archives at http://magazine.collective-evolution.com/portal/view-issues/

Jacque Fresco (age 97); American self-taught structural designer, architectural designer, concept artist, educator, and futurist. His blue prints for the future may revolutionize the way we look at the structure of cities.

Jacque Fresco is an inspiration to many, with his innovative ideas and blue prints for a sustainable society and planet that reject the current models of mass consumerism and self-destruction. Fresco holds many titles, such as educator, architectural designer, and concept artist but is known to most as a leading futurist who has spent the majority of his life promoting a re-structuring of our current way of living. His latest venture, called The Venus Project, advocates what Fresco has coined as a “resource-based economy”, a society which runs on socio-cooperation and which utilizes the methodology of science and the advancements in technology in one of the cleanest and most energy efficient systems ever conceptualized.

Fresco was born in Brooklyn, New York, in the 1920s amidst the Great Depression. Fresco is stated as saying that his experiences growing up around poverty, war, and devastation influenced his later work and views on society and provided him with the incentive for his life’s work.  He spent the majority of his young adult life pursuing a career in structural design, where he worked in such fields as aircraft design, Trend Home building, science fiction film set design, and freelance inventions. In the 1960s, Fresco co-wrote a book titled “Looking Forward”, which broke down the three important components of society which needed re-working: humanity’s values, people’s way of thinking, and the utilization of science and technology.

Although he did not gain popular acceptance his later years, Fresco continued to promote his concepts throughout the 1970s and 80s, lecturing at different venues and universities about his new theories such as “Socio-cyberneering”, an idea which implemented the highest advancements in technology to aid in human affairs such as building new cities and the replacement of common labor jobs. It wasn’t until the late 80s that Fresco and his friend Roxanne Meadows developed and incorporated The Venus Project.

Located in Venus, Florida, The Venus Project is a research center which develops innovations in the fields of freelance inventing, industrial engineering, and conventional architectural modeling. The Venus Project aims to answer the question, how can we utilize technology wisely so that there is more than enough for everyone on our planet? To make this happen, Fresco proposes that a planning process must first occur, where the entire infrastructure of the planet is re-worked as a coherent resource trading system. This means the planet working together as one, eliminating the false borders that separate continents and countries and looking at our planet as an open trading highway system. For example, where in the world is the most efficient place to grow certain crops and produce?

Today our resource production is based around mass consumerism which promotes environmental neglect, as apposed to being based around dynamic equilibrium or the carrying capacity of the planet. This means we are not living in a sustainable society, and it is only a matter of time before we suck the planet dry of its resources. The key to abundance and high standards of living for all, Fresco suggests, is to automate as much as possible in the shortest period of time, working alongside technology to produce and distribute resources in the cleanest and most efficient way possible. The Venus Project suggests that our biggest problems right now are technical, not political, and that our questions can be solved through the use of science and technology to benefit all, not just a select group. Fresco believes that computers can serve everyone, and that computer intelligence and engineering will be at the epicenter of the global intelligence network of the future planet. The computer systems would oversee things such as production and distribution of goods, to ensure there would be no shortages or overruns of resources to any location on the planet. Decisions being made in this innovative society would be based around the needs of the people and the conservation of the planet, not corporate interests.

A rendering of the living quarters in the new cities proposed by The Venus Project; this layout would make for the most energy efficient way to construct a city, with all of the resources stationed in the center and the living quarters situated on the outskirts of the city.

The Venus Project works to showcase the amazing and inspiring potential of computers and technology, and to help people understand that it is not technology that is responsible for the deterioration of the planet and society, but rather it is the abuse and misuse of machines and automated technology for selfish benefits that we should be weary of. Fresco and Meadows have been working together since the early 90s to provide technical blueprints for this proposed society, revealing how it would operate and how it would affect the entire social spectrum.

More interesting aspects of Fresco’s utopian world include the dissolution of automobiles, and the introduction of a complex but energy efficient transveyor and monorail system which would transport people wherever they needed to go. This would eliminate the pollution and high death rates caused by automobiles. The cities would be rebuilt as a circular shape, for this would allow the important resources to be readily accessible to everyone living in the city. The cities would be built using the least amount of materials as possible, and would be flexible enough to allow for innovative changes while preserving the local ecology.

Perhaps the most interesting aspect of Fresco’s society is the termination of the monetary system. He suggests that we must come to a point where the level of production is high enough that scarcity no longer exists, and that any resource or material need is readily available within these redesigned cities, without a price tag. Fresco states,

“people don’t really want money, but rather they want access to things when they need it, and people in a society of abundance… will really no longer begin to store and accumulate [unnecessary] things.”

In a society where everyone has equal access to goods and services, there is no need to fight for civil rights, or no need for laws that state “don’t steal”, because the abundance in this society would bypass that sort of behavior.

The cities would utilize the best in clean energy which would be harmonious with nature such as wind power, geo-thermal power, solar power, temperature difference, etc. This would supply energy to everywhere on the planet and ensure the highest standards of living for everyone. Polluting with hydro-carbons will be a thing of the past.

Some argue that Jacque Fresco’s plans are idealistic and crazy, and that our world is too far away from such a utopia. However, if we take a moment to observe our current state, it is easy to see that people are not content with the way the world is currently run. Countries all around the world are standing up to their governments with hope of reconstructing a future which provides equal and harmonious living standards for all.  We are aware that we need to create something new, and perhaps Jacque Fresco’s blueprints hold the key to the new Earth we’ve been waiting for all along.