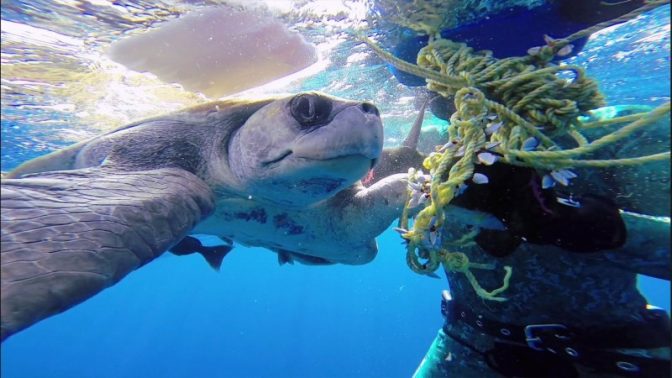 2012 saw the glorious (but obvious) declaration that non-human animals are conscious, living beings. This may have already been apparent for anyone who has lived with or experienced being around an animal in their day-to-day life, but as we know the science-community holds strict guidelines when declaring anything as definitive.

The video below showcases a beautiful moment between man and the majestic sea turtle, supporting the idea that animals have a consciousness like humans do.

Sea turtles are one of the Earth’s most ancient creatures. The seven species that can be found today have been around for 110 million years, since the time of the dinosaurs. The sea turtle’s shell, or “carapace” is streamlined for swimming through the water. Unlike other turtles, sea turtles cannot retract their legs and head into their shells, making them more susceptible to becoming trapped in various manmade devices.

Unfortunately with the many other instances like these, there isn’t always a costumed super-man available to save the day. Throughout the past century, the ill-planned activities of humans has led to the compromise of various marine ecosystems. Animals can accidentally ingest marine debris, or like the video shows, can become entangled. Ocean plants and coral reefs can also become damaged by derelict fishing gear.

I don’t know about you, but I can’t help but feel that these grandiose ocean dwelling creatures, along with great whales and dolphins, are nothing short of magnificent beings. They’ve existed on the planet throughout ages and ages of change. If only these beings could communicate with humans, perhaps they would be able to reveal wisdom they have collected throughout their years of existence and observations of the actions of man, putting our current way of living into a humbling perspective for everyone.