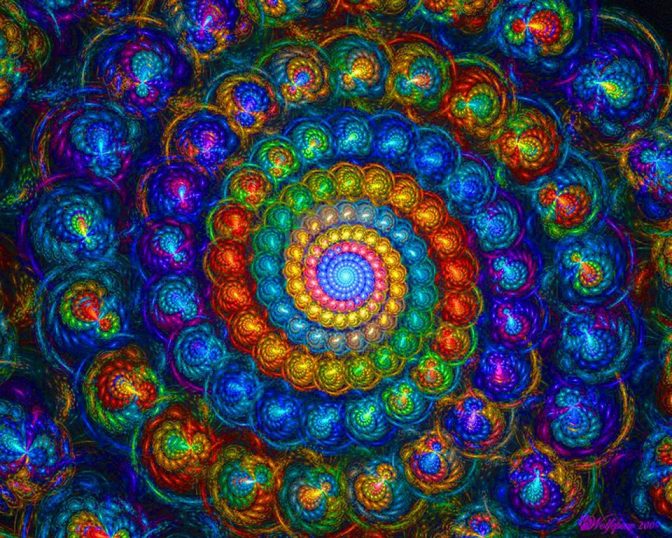 Enlightenment or “Unity Consciousness” is a term used to describe an exceptional state of being that arises from the acceleration of our biological potential. Throughout this journey we may apply psycho-spiritual techniques which have, up until relatively recently, been disregarded by mainstream scientific establishments and maligned by organized religion. Meditation, periodic fasting, affirmations, sound therapy and the occasional consumption of entheogenic plants are few among many ways to purge your psyche of “separation” while training your consciousness and nervous system to better communicate with one another.

Periodic meditation and the consumption of entheogenic plants will increase the amount of cross-lateral neurogenesis taking place within the brain and this gradual mental transmutation will create new connections, or “bridges” between previously seperated areas of the brain. These neural clusters would otherwise be organized hierarchically, reflecting our stratified society. When the brain is organized hierarchically, energy is restricted in it’s movement, which slows down communication and creates contradictions or “ego” as certain areas are neglected for the sake of others. When the brain operates cross-laterally it is better able to communicate within and amongst itself due to the quality and density of these new bridges between previously neglected areas and their more developed counterparts. Entropy, or “the amount of restricted energy” is decreased as more energy becomes available to the collective, where otherwise it would be restricted in it’s exchange due to an overemphasis on hierarchical organization.

These enlightening experiences often take the form of an “Altered state of consciousness”, whereby information from deep within our brain’s more primitive mammalian and reptilian layers is released simultaneously with the compound Dimethyltriptamine, resulting in visionary experiences riddled with emotionally-relevant, awe-inspiring content. As a result of this release, new networks are formed between the primitive layers and more evolved layers of the brain as we interpret these raw manifestations through the Archetypal symbols inherent within our associative civilized mind. Ultimately, this natural mechanism acts as a sort of fail-safe switch, which is capable of expressing, through a form of psychological catharsis, the most instinctual of trapped biological energies. The very same energies that are often repressed as a result of life in a civilized society.

The unfortunate consequence of this repression is the cutting off of man from his shadow-self, which inevitably leads to the pathological projection and along with it separation between man, nature, and everything else. When Jung spoke of integrating the shadow, he, whether unknowingly or not, referred to the proper neurological integration between our brains more evolved neo-cortex and the more primitive reptilian core (and the rest of the body as we will discuss later). When this facet of our humanity is functioning properly, as the shamans and ancient medicine men knew it should, we transmute our demons into art. As a result of these new neural networks built from incredible experiences – a consciously accessible connection forms between the civil man and the noble savage that can be utilized for sublimation and art. When we repress the reptilian cortex we no longer acknowledge our primitive self, instead projecting the savage on to anyone and anything that can act as a catalyst.

…The very projection itself acts as a symbolic manifestation of the separation we feel within.

When the brain operates in this uninhibited way, it becomes a unified, integrated force capable of seemingly instantaneous, effortless interaction and manifestation between it’s parts. Since different parts of the brain govern our nervous and endocrine systems, uninhibited communication between the reptilian brain and neo-cortex will eventually lead to CONSCIOUS and effortless control over the larger electromagnetic, neuro-chemical networks that surround the heart, gut and other organs. The microcosm of the brain reflects itself into the macrocosm of the entire body. This psycho-biological state, in it’s purest, is capable of the type of monk-mind/body characteristic of the Shaolin, and on the less extreme end of the spectrum – the calm, peaceful, and content nature of many spiritual gurus who see everything as connected (because their very mind and bodies are a literal microcosm of this belief).

In the central nervous system, there are several glands that release peptides (which are hormones) in response to emotions, (which are neurological and electromagnetic signals released by the heart and brain). These forces would otherwise be under unconscious control, inevitably effecting our lives from behind the scenes, like a slave to past conditioning, which is symbolic of the unconscious reptilian mind. This can sometimes lead to the build up of energy in one area, whilst being deprived in another area, leading to sickness and decay in the various organs and tissues surrounding that area. The body ultimately reflects the mind in it’s Hierarchical preferences, choosing to acknowledge some tension while ignoring others.

When we feel hurt, nervous, angry, or embarrassed, oftentimes we get specific sensations in a certain part of our body, and this is because of unacknowledged or unexpressed emotional tension, which literally suffocates that part of our body as it is deprived of bio-photons, which are single units of electromagnetic energy. When we release these feelings through kinetic expression or catharsis the electromagnetic energy breaks through like a dam, nourishing the area and activating hormonal receptors. Since hormones are responsible for growth, metabolism and fertility, as well as influencing the immune system and since the healing effects of EM energy have been demonstrated, one can see how depriving a part of the body through repression may have negative consequences.

To get an idea of where each emotion is stored in the body we look to chakras, an ancient belief in energy centers. It turns out that the 7 chakras are simply depicting 7 levels of the body as each organ and nervous/endocrine system in that area ascends from themes of base survival (root chakra, associated with legs and rectum – fight or flight response) to perception and enlightenment (third eye, associated with pineal/pituitary/hypothalamus and the crown chakra, associated with the more evolved neo-cortex). Anytime we suppress our true nature, or intentions, we create an energetic knot, or bio-electrical discharge within that part of the body and/or brain associated with that chakras evolutionary energy. This electric infection, if you may, has the potential,when left unchecked, to ripple and expand outwards, like ink dropped in water, which inevitably leads to the infection and decay of surrounding areas.

This is why, for example, Buddhist monks are capable of incredible, need I say, impossible acts of will and perseverance. “Enlightenment” restores our bodies natural bio-electromagnetic field and along with it, our natural ability to subvert these “infections” with the power of will and intent. Buddhist monks are able to control and direct with focused intent, the bio-photons of this field, in order to vent such static energy through Kinetic means. On the lower end of the spectrum, we see that this energy can be expressed through much simpler means, like with art and sublimation. When the tension is released, and our mind and body are one, we can direct these bio-photons to certain parts of our body in order to restore or support the structural integrity of our DNA. Like with directed meditation – when we focus on a specific part of our body we are drawing bio-photons to that area. A regenerative force capable of seemingly miraculous healing and evolution.

Full body “Coherence” between neurological systems leads to the rapid acceleration of spiritual and physical evolution. This is where we truly “become one”, psychologically, biologically, spiritually and collectively; whereby energy can flow freely between us and others, energizing our DNA and healing from within. When we are separate within, we are separate without. Coherence between two people becomes more difficult when either one lacks coherence within themselves. When we are united within, we are united with all, as the entrainment between two peoples heart rates becomes much easier when there are no competing biological cycles in either one of them. When we align with others in this way through “Heart Coherence”, bio-photons are exchanged and an expansion is experienced whereby the amount of total available energy increases exponentially in each person. The whole becomes more then the sum of it’s parts and more energy becomes available as a result of this positive feedback loop. No repression, no hatred, no separation. THIS is when ‘miracles’ become possible.

THIS is the revolution of consciousness.

As we grow toward enlightenment, we mend the schism between our conscious and unconscious minds, turning back the clock on conditioning imposed upon us since birth whilst simultaneously healing our body, mind and soul. Energy is better allowed to flow freely between the mind and body, feeding the soul and progressively accelerating our personal energy source and potential for rapid evolutionary growth. This transformation manifests within the psyche as the gradual but inevitable death of our ego, and its re-union with the unconscious mind; the dissolving of all separate “selves” into “unity consciousness”.

This will then reflect outward and into our lives as the unconditional love and acceptance of all that is, allowing for better communication to take place within and between ourselves, others and the larger collective consciousness, leading to the acceleration of global intent, mass potential, and its effect on the Earth’s larger socio-political and geomagnetic forces.

The revealing of humanity in its purest biological state.

Unconditional love will inevitably lead to the rapid acceleration of evolution on all scales due to an increase in the amount of available energy within the collective. Due to the lack of division amongst ourselves, energy is allowed to flow freely through you, between others, and back into the Earth, washing away stagnant forms and improving the condition of the larger ecological and geomagnetic forces of nature.

We are a crucial part of the Earth’s immune system and the state of our global consciousness is intrinsically linked to her own well-being. Your individual enlightenment echoes throughout the species larger morphic field and into the Earth’s surrounding magnetosphere as an electromagnetic scalar wave, converging in the pineal gland of others, helping them to awaken, and improving the Earth’s overall atmospheric condition.

It should be noted that this type of conscious evolution can and will open the door to higher sensitivities. Which have been utilized by the majority of legitimate mystics, prophets, psychics, and shamans in order to tap into certain modes of perception and sensitivity that lie just beyond the ordinary electromagnetic spectrum.

More on this as well as the effects of collective intent and consciousness on geomagnetism will be discussed in later articles.