Viktor Schauberger & the Science of Nature 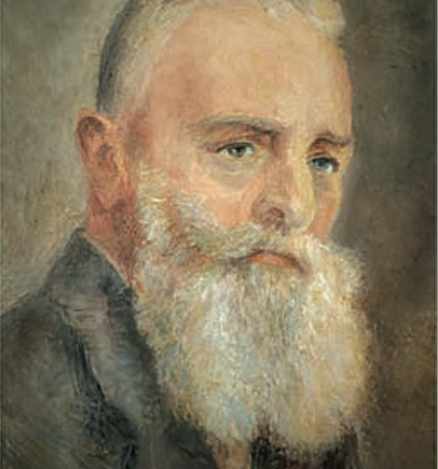 Born in 1885, Viktor was the last of several generations of forest wardens employed to look after the health of the pristine forests in various parts of Austria. His father wanted him to go to forestry college to learn the latest techniques of forestry management, but Viktor refused, believing that filling his head with these modern theories would prevent him learning from Nature. He had developed very meticulous observation of natural phenomena and an intuitive insight into Nature.

In 1911 he entered the employ of Prince Adolf zu Schaumberg-Lippe to superintend the latter’s forests. This was interrupted when Viktor was enlisted to fight in the 1914-1918 war in which he was wounded. After war’s end he returned to the Prince’s employ, who was looking for better and more economic ways to harvest the resources of these unspoiled forests in order to recoup the financial losses he had incurred due to the war. At the time the conventional method of harvesting large timber trees was very wasteful, as they were usually badly damaged when floated down the fast flowing streams. In 1922 the Prince announced a competition to see who could demonstrate a way of transporting these huge logs less wastefully. Olof Alexandersson vividly describes in his book Living Water how Viktor developed an ingenious, but unorthodox, flume system for safe transport of huge logs down the valleys. His winning of the prize for a successful solution angered the conventional hydraulic engineers, and was a foretaste of the hostile reception he would receive from academic scientists generally for his unconventional ideas.

Viktor’s research centered on the influence of temperature on the movement and energy of water. He published papers on his research in specialist magazines like Implosion, Mensch und Technik, and Tau magazines. In 1933 he published a book Our Senseless Toil – The Source of the World Crisis (Unsere Sinnlose Arbeit), a criticism of contemporary ideas of science and technology. He prophesied the eventual collapse of our civilization due to its arrogant and destructive attempts to control Nature, and its inability to understand how all of life is interconnected and interdependent.

Viktor’s ingenuity as an engineer and inventor enabled him to develop appliances to harness Nature’s powerful energies with no input from outside sources of power. He wanted to release humanity from its slavery to centralized and wasteful power sources by providing domestic turbines and environmental and water conditioners.

His efforts captured the attention of the Nazi authorities and he was forced to develop powerful turbines for the Third Reich’s war effort using skilled concentration camp labour. He hated this, and after the war tried to pursue his interest in Earth healing and Nature-friendly agricultural methods. However American intelligence confiscated many of Schauberger’s research papers and his then current prototypes in 1945. In 1958 US commercial R & D interests invited the Schaubergers to America to learn about his research on implosion techniques. Viktor naïvely thought that the Americans would be good partners to help advance his research programme. When Viktor discovered that they wanted only to milk him of his ideas, possibly for machines of war, he refused to cooperate and was eventually allowed to go home, having signed away all his rights. He died of a broken heart shortly afterwards.

Viktor’s son Walter, who had an academic physics education, decided to set up the Pythagoras Kepler System Institute (PKS) to study his father’s research, with his own particular emphasis on mathematical research to demonstrate how his father’s inventions followed basic laws of sacred geometry and the physics of Kepler. Richard St Barbe-Baker, a pioneer of forest conservation and replanting, and a friend of Viktor’s, took Walter to universities in Britain to tell them about his father’s research. Although the reception was favourable, these new ideas were rejected as being too challenging to conventional physics.

Olof Alexandersson heard about the research at the PKS and interviewed Walter about his father’s life and research which resulted in his book Det Levander Vattnet (Living Water) which was published in Sweden in 1976. The Scottish-origin Coats family entered the scene. Callum’s father John Coats, who was the international vice-president of the Theosophical Society (died 1980), had connections all over the world. His mother, Betsan Coats, who also had a profound interest in ecological issues, heard about the PKS from Richard St. Barbe-Baker, and took their son Callum to meet Walter in 1977. Callum realized that his future work lay here. He eventually spent three years studying with Walter on a daily basis and started the huge project of translating Viktor’s prolific writings.

Callum’s parents had given him a holistic worldview with the rich background of Theosophical philosophy. He went to schools in Scotland and Germany, becoming bilingual in German and English. He went on to get a degree at the Architectural Association in London and was a practicing architect before he met Walter.

At this point Alick Bartholomew stepped into the picture. He had started a pioneering publishing programme exploring new ideas in the human potential field. His main concern was to reconcile science with a spiritual worldview. His Turnstone Press list was a very eclectic mixture of philosophical and practical books, so when he was shown the Swedish edition of Alexandersson’s book, he recognized it at once as an important addition to his innovative list. Alick’s scientific background was in geology and geography at the University of Cambridge. His introduction to a holistic worldview was initiated through the wide range of themes in the books he published in the Turnstone Press between 1971 and 1980.

When Callum heard from that Alick was publishing an English language edition of Alexandersson’s book, he contacted Alick and offered his help with editing Living Water, subtitled “Viktor Schauberger and the Secrets of Natural Energy”, which was published in 1982. Alick commissioned Callum in 1981 to write a detailed review of Viktor Schauberger’s work in a book to be called Living Energies, an Exposition of Concepts Related to the Theories of Viktor Schauberger, which Gateway Books subsequently published in 1996. During his on-going close association with the PKS over the next 17 years Callum started the immense and daunting task of translating and editing Viktor’s writings, culminating in the publication of the last of five books on Viktor Schauberger in 2000.

Alexanderson’s Swedish publisher decided not to release any other foreign editions of the book for 10 years, which gave Living Water a clear run. It is a good introductory work on Viktor Schauberger and his research, readable and informative at a popular level. The German market for Schauberger’s ideas had not yet developed, because he was basically persona non grata, having worked, albeit unwillingly, for the Third Reich. But in the late 1980s a German edition of the book was published and Schauberger’s ideas began to be disseminated in the German-speaking countries. This was followed within a few years by a German edition of Callum’s new book Living Energies.

The publication of Living Energies in 1996 was followed by the four volumes of Viktor’s writings in the Eco-Technology series, translated and edited by Callum Coats, which cemented a very fruitful partnership between Callum and Alick. It could not be surpassed as the most authoritative book on the Schauberger research.

Living Energies was very successful. It is a long book, set in double columns, but not always an easy read. Alick felt that if Schauberger’s worldview could be expressed in a simpler style, it would reach a wider market. So he persuaded Callum to let him write Hidden Nature, which is mainly a distillation of the ideas and diagrams from Callum’s Living Energies, with a good measure of Alick’s understanding of the historical and ecological implications of Schauberger’s worldview.

The main interest in Schauberger’s work in the English speaking countries, in Germany and Sweden, was in his energy generation devices, and many wished to try to replicate them. Both Viktor and Walter commented that nobody should try to replicate Viktor’s devices unless they were prepared with humility and respect to observe Nature’s ways and to learn from them. Viktor’s cautionary advice was “Comprehend and then Copy Nature”, realizing that many people had a rather egocentric wish to master these remarkable energies within Nature’s workings.

There has been some ongoing research to duplicate some of Viktor’s experiments and replicate his turbines in Sweden and in the USA (See the links page on this website for further information), but no one has yet succeeded in replicating his turbines.

Callum and Alick understood the enthusiasm for developing free energy machines, but were both more interested in the wider implications of Viktor’s research, Alick particularly on the landscape and environmental side, whereas Callum was drawn to develop Walter’s mathematical and hydrological theories.

A new author entered the scene with a valuable contribution. Jane Cobbald, who was particularly interested in what happened beneath the Earth’s surface, wrote a biographical account of Viktor’s work in the area of fertility and energy exchanges in the soil, Viktor Schauberger – a Life of Learning from Nature, which includes an insightful interview with Ingeborg Schauberger, Walter’s widow. She also imports from Austria the Schauberger-inspired copper gardening tools.

Interest in the remarkable vision of Viktor Schauberger is continually growing throughout the world. One of his strongly held views was that our mistreatment of water is the principal cause of the deterioration of our culture and our increasing health problems. To appreciate Schauberger’s groundbreaking research from the point of view of mainstream physics is difficult and unproductive. Viktor’s intuitive science is more akin to quantum physics, where the subtleties of energy connections become more accessible.

We need to take off our conventional scientific and technological blinkers to see the wider picture, because Schauberger’s vision is entirely holistic, a term and a worldview that is often misunderstood within the mainstream of our culture. His vision was of life as a great drama, with all organisms playing a part. Every cell and water molecule sounds a note that collectively become the music of life, sometimes discordant, but generally developing a harmonious and increasingly complex orchestral creation.

It is possible that we may have to go through a level of breakdown in our culture before we can really appreciate Viktor’s extraordinary prescience and guidance. Our divorce from Nature has led to an appalling outcome ― vandalism of the environment and the unbalancing of Gaia’s energies through the exploitation of her resources.

Perhaps the true role of humanity as custodians of the Earth can come about only by a major shift in our attitudes. It is possible also that as a society we are not mature enough to take responsibility for Victor’s energy devices, whose time may come according to Nature’s wisdom.