What Would A Rat Do: Rescue And Save Another Or Go For The Food? 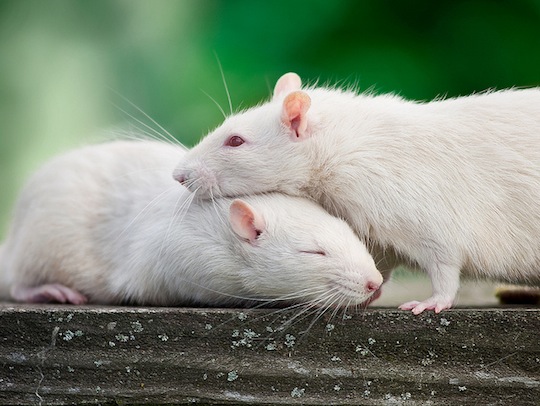 Rats tend to get a bad rap. Commonly pegged as tiny, sewer-dwelling, beady-eyed monsters, these common rodents definitely aren’t looked at in the same light as other rodents, such as hamsters or even mice. But a new study out of Japan may change your perspective on rats for good.

Researchers at the Kwansei Gakuin University in Japan found that when rats were put in a situation where they could drown they will, indeed, rescue their distressed pals from danger—even when they’re offered chocolate instead. They’re also more likely to help when they’ve had a similar unpleasant experience of their own, adding to growing evidence that the rodents feel empathy.

For their test of altruistic behaviour, the team devised an experimental box with two compartments divided by a transparent partition. On one side of the box, a rat was forced to swim in a pool of water, which it strongly disliked.

Although not at risk of drowning—the animal could cling to a ledge—it did have to tread water for up to 5 minutes. The only way the rodent could escape its watery predicament was if a second rat—sitting safe and dry on a platform—pushed open a small round door separating the two sides, letting it climb onto dry land.

Within a few days, the high-and-dry rats were regularly aiding their soaking companions by opening the door, the team reported in Animal Cognition.

They did not open the door when the pool was dry, confirming that the rats were helping in response to others’ distress, rather than because they wanted company, said Peggy Mason, a neurobiologist at the University of Chicago.

Rats that had previously been immersed learned how to save their cagemates much more quickly than those who had never been soaked, suggesting that empathy drove their behavior, said Mason. “Not only does the rat recognize distress, but he is even more moved to act because he remembers being in that situation.”

Next, the team put the rodents to the ultimate test, pitting chocolate against altruism.

In this experiment, rats on the dry platform had to choose between two doors, one that allowed their soaked companion to escape from the pool and another that provided access to a tasty chocolate treat. The rodents chose to help their companions before seeking the snack 50% to 80% of the time, showing that the urge to help a fellow rat was at least as strong as the desire for food, the authors say.

The results add substance to the theory that there is an evolutionary basis for empathy and other helpful behaviour, independent of culture or upbringing.

We want to hear your opinion, do you think that there is an evolutionary basis for helpful behaviour? Share your thoughts in the comment section below!