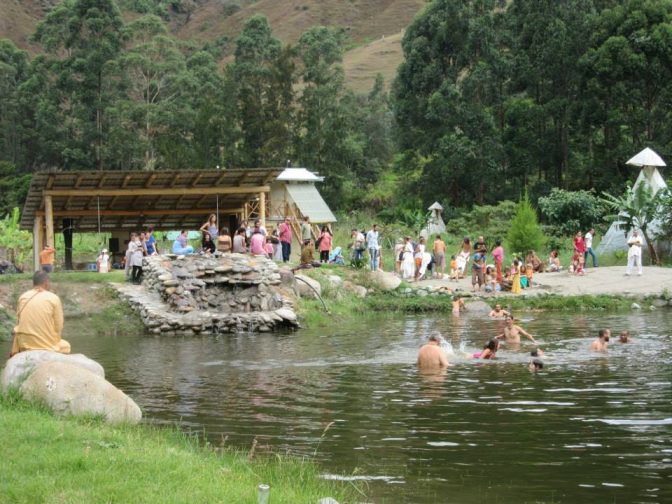 So much is spoken of the need for us to commune – many across the globe feel a strong pull to live in real community. Mostly this is driven by a sense of not belonging where we already are – the felt sense that a higher form of existence is possible; something or somewhere our hearts can expand and we can experience the beauty of life without the cares and concerns we have hitherto harboured each day.

For me I have known it to be my life purpose to initiate such a community since a very young age – a protected space which is truly transcendent of any and all entropy and human dynamic issues – the type of community that does not, to the best of my knowledge, exist as yet on planet earth. Only in the last few weeks however have I finally understood the essence of ‘why’ such an undertaking has been calling me – the root problem that is urging to be addressed.

12 years ago I was fortunate enough to be graced with a remarkable experience of the more feminine aspect of the awakening process – the deep connection with mother earth that brings with it a sense of love for all things, physical lightness, the ability to see the auras of people and trees and so on. This lasted, in full swing, for around 10 months – it was like a glimpse of the future, if… I got my shit together!

The last few months however is the very first time that both of these aspects have become fully embodied at the same time. It has been the most remarkable few months – a level of beauty which words cannot describe. It has allowed my own life purposes to find their ultimate expression; it has opened the door for the purest form of love with another to emerge; it has done many beautiful things… but it has carried with it something else!

You see once one has embodied both the masculine and feminine aspects of the awakening process, there is no longer simply a compulsion to share the truth (which does of course remain), but also a future-pull of sorts which begins to draw out the deepest ‘qualities’ which love and truth command. Love and truth are the foundation of everything but they also possess qualities – honesty, compassion, response-ability, vulnerability etc. and most importantly, the quality to which this article relates – innocence.

But whilst the truth may carry with it certain qualities that naturally emerge once one has embodied love and truth in balance and equal proportion, the problem is that, unlike the realisation and embodiment of pure love and pure truth themselves (which is universally accessible to anyone at any time regardless of one’s environment/circumstances), the same does not necessarily apply to the emergence of the qualities which they carry with them. Innocence, in particular, gets a rough ride here…

As innocence – real true innocence, not the commercial spiritual idea of innocence – begins to emerge as a quality of an awakened integrated self, the unfortunate reality is that the rest of the world, still trapped in its entropic dialectic, subconsciously brutalises/destroys it whenever it begins to emerge – we do it to our children (which is the gravest of crimes), but we also do it to each other should any one of us be brave enough to stick our head above the pulpit and dare to rest in such a space.

Over the last few months this has really begun to emerge in me (even more so since the recent union which this blog speaks regularly to), and it has probably been the saddest time of my life to watch how everyone who has not themselves crossed the self-realisation Rubicon is drawn to kill it. In fact I’m furious about it, and the saddest part is that few, if any, seem to be able to relate to that.

And so through the pain of watching this attempted bastardisation, both of my own sovereign emergence, and those rare few around me who have also stepped up to the plate, it has quite beautifully allowed me to crystallise the ‘why’ of my own life purpose – that purpose has, since a very young age, been to anchor a truly transcendent conscious community… and the why?

Yes, the work that NewEarth and other organisations does in bringing awareness to our civilizational dystopia is profoundly worthy, and yes the work that all who have embodied the Truth of life are called to do in sharing that Truth in the world equally so, but the unfortunate fact is that (unless and until the collective morphogenetic field of humanity is anchored in love and truth) love and truth will never express the pure essence of their innate qualities in the world. Not properly anyway. For unlike the embodiment of love and truth themselves, the arising of their qualities (innocence most notably) will never reach beyond a very base level expression. For these qualities to emerge they need space – they need the room to grow and develop without being hunted down by vampirical elements and narcissistic behaviours. And really (absent the entire world waking up) it is only true community that offers this promise – spaces which are so purely anchored that only the worthy could ever enter; spaces where those who have met their maker and seen themselves in its reflection may breathe and expand. It is such spaces, however small, which will serve to anchor a new gestalt for an awakening humanity, and hardwire it into the collective morphogenetic field for the benefit of all.

Since starting NewEarth, I have never before had a ‘why’ for anything that I’m doing – the world is perfect the way it is, and I’m just doing what I do because the truth compels it to be so – I am its instrument. Such was my reality. But maybe I was missing a trick – it does feel, now at last that with a truly defined ‘why’, this long-realised life purpose of grounding a true transcendent community stands on the praecipe of emergence.