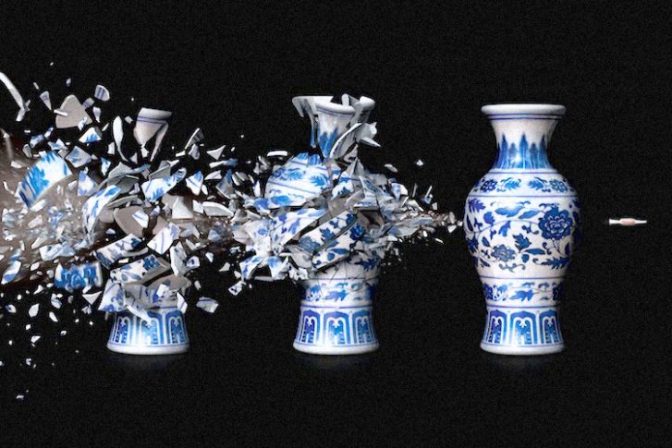 “In the long run, nothing escapes the Second Law of Thermodynamics. The pull of entropy is relentless. Everything decays. Disorder always increases.” ~James Clear

2017 has been a banner year for catastrophe, and while there seems to be little respite from the chaos and madness showing up in our daily news feeds, the non-stop chain of drama serves to highlight one of the most critical and fundamental aspects of our universe: entropy.

Imagine that you take a box of puzzle pieces and dump them out on a table. In theory, it is possible for the pieces to fall perfectly into place and create a completed puzzle when you dump them out of the box. But in reality, that never happens.

Quite simply, because the odds are overwhelmingly against it. Every piece would have to fall in just the right spot to create a completed puzzle. There is only one possible state where every piece is in order, but there are an infinite number of states where the pieces are in disorder. Mathematically speaking, an orderly outcome is incredibly unlikely to happen at random.

The world as we know it is a highly structured system, assembled by organized determination and will power, no matter if that structure was designed for benevolent purposes or for malignant ends. Societal and environmental order is the product of effort in overcoming entropy, in overcoming the universe’s natural tendency to slide into disorder. Once a particular order is achieved, it is an uphill battle against the forces of nature to maintain this state, combatting the interminable power of entropy.

This holds true for our personal endeavors such as business, relationships, money, love, and so on, and also holds true for the greater systems we’ve created to govern this world. All of these areas of life require constant maintenance and effort in order for them to remain in their singularly beneficial state. We are constantly attempting to create order out of chaos, while chaos and disorder is the natural state. We are in a never-ending war of odds.

It is the natural tendency of things to lose order. Left to its own devices, life will always become less structured. Sand castles get washed away. Weeds overtake gardens. Ancient ruins crumble. Cars begin to rust. People gradually age. With enough time, even mountains erode and their precise edges become rounded. The inevitable trend is that things become less organized.

Nothing, when left alone, will remain in a state of ordered cohesion, and because of this, it is our work to assess our world as it is and continue to apply positive effort in our personal and communal lives to continually improve and counteract entropy. Entropy is the natural order of all things.

In short, we are living in a universe in which the primary law is that of ever-increasing decay, and as such, it requires a continually greater effort to combat this to bring order into our lives. As the world increases in technological and social complexity, the chances that these variables will order themselves in such a way that is beneficial to all beings become increasingly higher. Therefore, it is incumbent upon each of us to continue to push for the creation of a state of order and favorability.

None of us can bypass the immutable laws of nature. Goodwill and positive intention carry serious weight in determining what kind of future we realize, but, the fact remains that we always have work to do, much like maintaining a house.

The insight here is that we do have the individual and collective power to fight back against this force, and in dedicating ourselves to doing so, we reveal our greatest power as human beings: the ability to co-create a meaningful, purposeful and joyful life on this extraordinary living planet.

Dylan Charles is a student and teacher of Shaolin Kung Fu, Tai Chi and Qi Gong, a practitioner of Yoga and Taoist esoteric arts, and an activist and idealist passionately engaged in the struggle for a more sustainable and just world for future generations. He is the editor of WakingTimes.com, the proprietor of OffgridOutpost.com, a grateful father and a man who seeks to enlighten others with the power of inspiring information and action. His remarkable journey of self-transformation is a testament to the power of the will and the persistence of the human spirit. He may be contacted at [email protected].

This article (Why the World Always Seems to be More Chaotic and Complicated) was originally created and published by Waking Times and is published here under a Creative Commons license with attribution to Dylan Charles and WakingTimes.com. It may be re-posted freely with proper attribution, author bio, and this copyright statement.