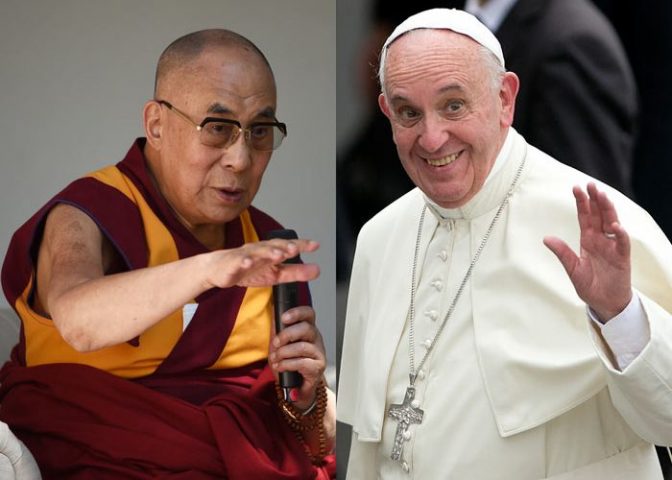 Religion is a controversial subject to discuss, as people have so many varying and conflicting beliefs. The effects can be severe, ranging from people inadvertently judging and shying away from those who do not share their beliefs, to destroying countries and killing their people. War and religion were never meant to mix, and yet, somehow the world we live in today is filled with internal and external wars that keep world unity from flourishing.

So, is the answer to not have faith at all?

The world’s most prominent religious leaders came together to present their answer on how faith can work in the world. The pope, Dalai Lama, and Ayatollah Sayyid Fadhel Al-Milani, among others, issued a joint statement with a simple yet important message: Make friends with people of other faiths.

“Our advice is to make friends to followers of all religions,” said Ayatollah Sayyid Fadhel Al-Milani, one of the U.K.’s most senior Shia Muslim clerics, in a video recording.

“Personal contact, personal friendship, then we can exchange a deeper level of experience,” said the Dalai Lama.

“My religious life became richer with his explanations, so much richer,” Francis said, referring to Skorka. “And I guess the same happened for him.”

Despite conflicting religious views often leading to discrimination and violence, these world religious leaders believe the answer is not to end religion, but to promote acceptance. This understanding of other faiths can then lead to friendship, which ultimately leads to unity.

The online statement came as a promotion of the “Make Friends” initiative of the Elijah Interfaith Institute, an interfaith organization with offices in Israel and the United States. The organizers of the project noted in a press release that their mission is to lessen people’s distrust and disdain of others’ religions, and even reduce violence.

The video project features a total of 22 holy leaders representing a wide range of beliefs — Sikhism, Buddhism, Hinduism, Islam, Judaism, and Christianity. Their unity alone is enough to show the possibilities.

Psychologist professor Robert Zajonc also conducted research that showed coming across something or someone creates familiarity, which makes you like a person, idea, or thing more than you did before you were first introduced. The effect is referred to as mere-exposure.

“One of the wonderful things about spending time with people completely unlike you is you discover how much you have in common. The same fears, the same hopes, the same concerns,” Rabbi Lord Jonathan Sacks, the U.K.’s former Chief Rabbi, said in the video.

Rabbi Dr. Alon Goshen-Gottstein, the Elijah Interfaith Institute’s director, called the project a means to presenting a new theological perspective, focusing on the need for friendship between faiths.

“We cannot deny that in the books of many religions you can find texts that are not very open, even hostile, to people of other faiths,” he said. “Therefore, when the world’s most important leaders call for friendship, they are in fact affirming a particular way of practicing religion and rejecting another.”