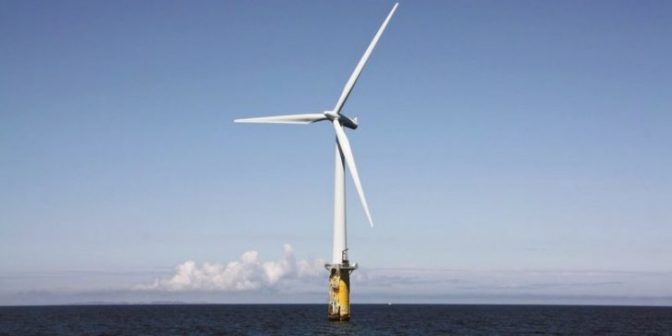 (ANTIMEDIA) Scotland — Fifteen miles off the coast of Scotland, anchored to the floor of the North Sea, the world’s first floating wind farm began delivering electricity to the Scottish grid on Wednesday. Statoil, the Norwegian energy company that developed the project, says that at peak production the system will provide power to 20,000 households.

The Hywind Scotland project consists of five giant wind turbines, each extending nearly 600 feet above the water and over 250 feet below it. The turbines, which were installed in August and began producing power in September, are the first to lack a direct attachment to the seafloor. Instead, each is held in place by a trio of suction anchors.

Each of the five mammoth turbines, whose rotors are over 500 feet wide, have a six megawatt (MW) capacity, making Hywind Scotland a 30MW-producing installation. Power is transferred to land by way of underwater cables, and a partner company of Statoil plans to install a battery storage system on shore to help regulate power delivery to households.

“This marks an exciting development for renewable energy in Scotland,” First Minister Nicola Sturgeon said at an event Wednesday. “Our support for floating offshore wind is testament to this government’s commitment to the development of this technology and, coupled with Statoil’s Battery Storage Project, Batwind, puts us at the forefront of this global race and positions Scotland as a world centre for energy innovation.”

Statoil claims Hywind turbines have the potential to operate at depths of over 2,600 feet. The energy firm says this is highly advantageous because 80 percent of offshore wind resources are located far beyond the 200-foot depth limits of traditional fixed-bottom installations.

Mohamed Al Ramahi, CEO of Masdar, the company developing the Batwind battery system, says the revolutionary Hywind project is only the beginning:

“Hywind Scotland is showing that floating wind technology can be commercially viable wherever sea depths are too great for conventional fixed offshore wind power. This opens up a number of new geographies, and we are already looking at future opportunities with our partners, building on our existing international portfolio in onshore and offshore wind energy, and solar power.”