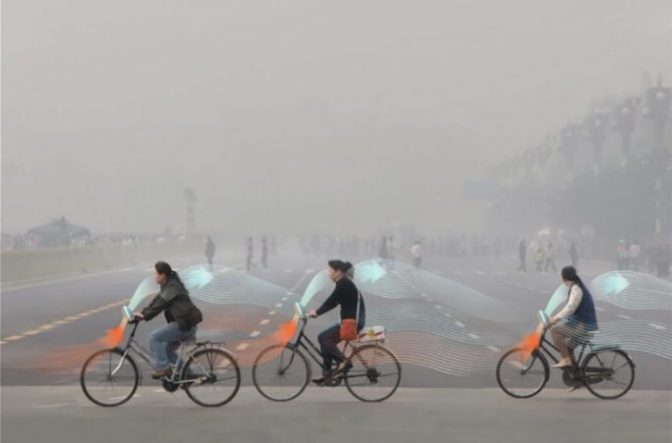 Bikes have long been considered the eco-friendly version of transportation. In a day ruled by planes, trains, and automobiles, it’s nice to see someone biking to and from work or for doing errands. But what if bikes were more than just a method of environmentally-friendly transportation? What if they were environment enhancing, too?

Also known as ground-level ozone, smog is a mixture of air pollutants — nitrogen oxides and volatile organic compounds — that combine with sunlight to form ozone. Smog in general wreaks havoc on our lungs and heart. It can therefore create heart problems, along with bronchitis, asthma, and other lung issues. Even at low levels, smog can reduce lung function.

When smog is heavy in urban areas, it may deter people from wanting to bike around the city, which only worsens the problem by adding more cars on the road. Roosegaarde hopes that he can break this cycle with his new invention that can inhale dirty air, clean it, and pump it out to benefit the cyclist.

“Beijing used to be an iconic bicycle city. We want to bring back the bicycle as a cultural icon of China and as the next step towards smog free cities,” said Roosegaarde in a statement.

The Smog Free Bicycle came to fruition in a Studio Roosegaarde-hosted workshop at contemporary art museum M Woods in Beijing. Professor Yang of Tsinghua University and artist Matt Hope had been working on an idea for an air-filtering bike around four years ago. Their idea led to the development of this new bike innovation, which was ultimately launched alongside the opening of the new smog-free tower in Tianjin.

According to Studio Roosegaarde, the new smog-sucking bicycle is “currently in the first stage and is intended to become a medium for smog free cities, generating clean air by pedaling, and creating impact on the larger urban scale.” The concept, according to the studio, stands in alignment with China’s growing interest in bike sharing programs.

Though there’s certainly a long way to go toward putting a significant dent in pollution and traffic in the country’s capital, it’s refreshing to see that interest is growing in practices that benefit the environment and human health, and this shift is giving rise to some creative solutions.