What Everyone Is Forgetting About the NFL’s National Anthem Protests 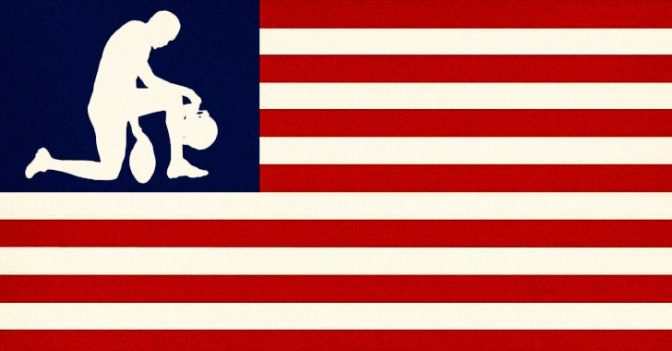 Everywhere you look, people are arguing about the National Anthem protest. “Patriotic” Americans say kneeling during the protest is offensive to members of the military who “fought for our freedom.” Others, regardless of whether they agree with the kneeling or not, say the players have the right to protest.

Military veterans themselves have chimed in on both sides of the argument — many backing the Kaepernick-inspired protests.

But with Trump’s tweets adding a layer of confusion and conflict to the motives behind NFL football (and now other sports) kneelers, many people are forgetting why, exactly, these protests are taking place to begin with.

Shortly after he began the protest in August, 2016, Colin Kaepernick gave a lengthy interview explaining exactly why he was kneeling for the National Anthem.

When pressed for specifics, Kaepernick continued:

“There’s a lot of things that need to change. One specifically? Police brutality. There’s people being murdered unjustly and not being held accountable. People are being given paid leave for killing people. That’s not right. That’s not right by anyone’s standards.”

So, as you see, Colin Kaepernick did not start the kneeling protest as a freedom of speech statement asserting standing for the pledge is not mandated by law — as the current dialogue may have had you guessing. Rather, he began the protest to draw attention to the specific issues of injustice, brutality, and institutionalized racism that have bubbled to the surface amid an epidemic of police killings in the United States — especially of young, unarmed black males.

Finally, when he was asked if he thought he was disrespecting the American flag and the U.S. military by kneeling for the National Anthem, he responded:

“I have great respect for the men and women that have fought for this country. I have family, I have friends that have gone and fought for this country. And they fight for freedom, they fight for the people, they fight for liberty and justice, for everyone. That’s not happening. People are dying in vain because this country isn’t holding their end of the bargain up, as far as giving freedom and justice, liberty to everybody. That’s something that’s not happening. I’ve seen videos, I’ve seen circumstances where men and women that have been in the military have come back and been treated unjustly by the country they have fought for, and have been murdered by the country they fought for, on our land. That’s not right.”