What Happened to the Long-Lost “City of Giants” Hidden Deep Within Ecuador’s Amazon? 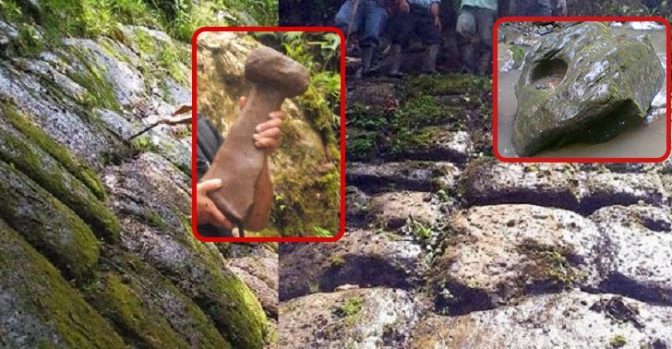 A team of researchers had discovered a while ago an ancient complex of pyramids and various structures in a remote part of the Ecuadorian Amazon rainforest.

They documented the site as best as they could, snapping several images of strange structures and artifacts and filming a couple of videos.

This ancient city—believed to have been built and inhabited by giants was mentioned by Natives in the region, but no one had dared to search for the lost city before.

But hold on a sec, giants aren’t real.
Well, Ecuadorian legends speak of ancient cities of giants, abandoned by their inhabitants long ago, little by little these allegedly once majestic cities have been claimed by nature over the past couple of centuries.

In fact, not only due Ecuadorian legends speak of Giants, but tribes throughout the Amazon basin recall the existence of an ancient race of giants who built prosperous cities long before ‘regular-sized’ humans arrived in the area.

Similar stories can be found across the planet, no matter where we look, from Patagonia to Northern America, from Europe to Asia, ancient texts and oral legends mention beings of humongous size, walking on Earth in the distant past.

And exactly such legends are what inspired a group of researchers to travel to a remote part of the Ecuadorian Amazon in order to search for the “Lost City Of Giants.”

It is said that several tribes had been using the City Of Giants as a traditional meeting place since time immemorial and it is believed that it was inhabited by powerful spirits.

The place was sacred to locals and they talked about their builders with a mixture of fear and respect.

Natural formation or not?

The reason behind this attitude towards the builders was clear once the team realized the presence of ancient megalithic structures on the site.

The largest of the structure found by explorers was a pyramid 80 meters high by 80 meters wide with a slope too high to be considered a natural formation.

It had been built using hundreds of large, irregularly shaped rocks, each weighing approximately 2 tons.

At the top of the structure is a flat area that could have been used as a ceremonial or sacrificial platform.

Near the pyramid, researchers found many artifacts carved of stone.

“That looks like a paved wall, an old street or square with a 60-degree angle, maybe the roof of a larger structure,” said French-American archaeologist Benoit Duverneuil.

“Many of the stones were perfectly aligned, have sharp edges and appear to have been sculpted by man’s hand.”

The protective layer of soil had preserved the smooth surface of the stones. It also revealed the presence of a cement-like substance used to keep boulders together.

Judging by the apparent age of the ruins, this could be the first example of concrete used in America.

Apparently, the builders of this ancient citadel possessed engineering knowledge well ahead of its time.

And while researchers were overwhelmed by the notion they had come across a lost city—and a lost city of giants I might add—they were shaken when the government decided to take a look with their own team of experts.

As noted by Bruce Fenton on Earth4all.net, “the official report by the Ecuadorian government team was a conclusion that the site was entirely natural.”

Benoit Duverneuil, Fenton and their colleagues were dealt a terrible blow to their hopes for the site being properly excavated and researched.

But despite the fact that the government had deemed the site a natural formation unworthy of further studies, the team searched own and found more “artificially made structures” near the infamous megalithic site.

The team noticed several tool-like objects of preposterous size and strange artifacts protruding from the ground.

As their quest for evidence continued, they came across perfectly rectangular blocks, stepping of blocks, smooth stone facing, and curiously shaped stones and a cement-like mortar—clay like when wet, but appeared as stone when dry.

Until this day no further progress has been made, and the discovery of what was once considered a historical discovery was quickly ‘eclipsed’ by controversy and the governments unwillingness to dig deeper for archaeology, although governmental institutions did want to dig, but for OIL.

What we have today are only some images and a couple of videos that document what these explorers claim to be, a long lost city of giants, deep inside the Ecuadorian Amazon.