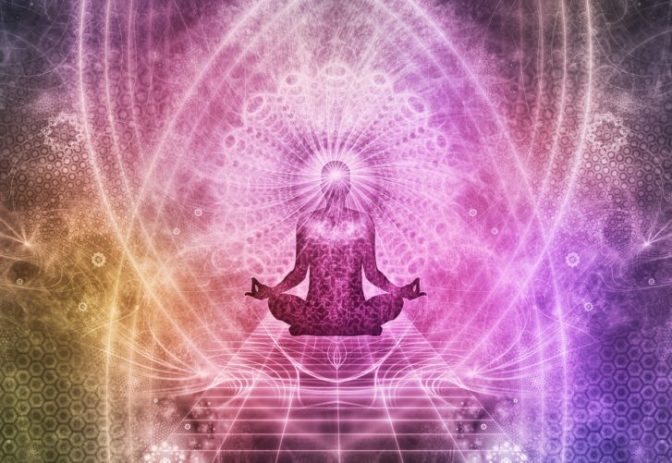 A Book Written by SWAMI PANCHADASI

Chapter I. What Is the Human Aura – The subtle, invisible emanation radiating from every individual. An ethereal radiation. The egg-shaped human nebula. Psychic atmosphere sensed by everyone, but seen by but few. The clairvoyant vision. The phosphorescent flame, and luminous cloud. The colors in the aura and what they mean. Effect of mental states, emotion and passion, upon its aura. The human aura is a very important and interesting phase of every personality. The finer forces, the most powerful.

Chapter III. The Astral Colors – Each mental or emotional state has its own astral hue, tint, shade or color. The Primary Colors, Red, Blue and Yellow. The Secondary Colors, Green, Orange and Purple. The combinations of Olive, Russet and Citrine. Black and White, and how formed. Key to the Astral Colors. Red the Physical Color; Blue, the Spiritual; Yellow, the Mental. White and Black the two poles of Spirituality. Rainbow astral colors. Whirlpools of flame. Flashes of astral light. A wonderful phenomena. Practice will enable almost everyone to perceive plainly the outlines of the Prana Aura.

Chapter IV. The Astral Colors (Continued) – Interpretations of the Astral Color Group. The Red Group. The varying reds of vitality and health; the shades of love; high and low; the crimson of sensuality; the scarlet plane of anger and passion. The Yellow Group of Orange, and the Pride of Intellect. The Golden Yellow of Intellectual Attainment. The haloes of the great teachers. The lemon hue of inferior intellect. The Green Group. The high and low greens. The green of love of nature. The green of Altruism. The green of sympathy. The dull green of insincerity and deceit. The ruddy green of Jealousy and malice. The Blue Group. The great souls of the spiritual and religious emotions. The Brown Group. The Gray Group. Black Group. White Group. The Great White light.

Chapter V. The Aura Kaleidoscope – What the astral body is composed of. Also the etheric double. The ever changing clouds of aura coloring. Placid scenes and furious storms of the Aura. Opalescent effects. The pearly color of the etheric substance. The Aura of mental activity. The Aura of reverie or sleep. The Aura of anger and passion. The Aura of hate. The Aura of love. The Aura of churches, prisons, hospitals and places of vice. The Aura of character and of passing feeling. Astral atmospheres of buildings and places. Collective and composite auras. A key to some great and deep occult teachings, and esoteric mysteries. How the trained occultist is able to ascertain the character, and tendencies of a person.

Chapter VIII. Auric Magnetism – Human Magnetism – The Auric Reservoir of Magnetism. Magnetic Healing, how caused and why it occurs. Use of its hands. Flow of etheric force. New Methods of Magnetic Healing. Use of Auric Colors. Analysis and Full Explanation. Absent treatment by Auric Color Vibration. Tables of Auric Healing Colors, showing effect on Nervous System, Blood and Organs. Helpful suggestion in Auric Color Healing. How to Treat yourself and others by this method. Healing by the Great White Light.

Chapter IX. Developing the Aura – How to build up a strong, positive Aura. How to flood the Aura with the right vibration. How to influence the color in the Aura. “Holding the Thought.” Reflecting Color States. Principles of Occult Color Re-action. Self-analysis. Self-Treatment for Character and Qualities. Effect of visualizing colors. How to get the keynote of Color vibrations. The Key of Success.

Chapter X. The Protective Aura – A forbidden subject plainly discussed. Need of Occult protection. How to change the Aura so that it will repel physical contagion and psychic attacks. How to Guard the body by Auric Colors. How to energize and illumine the mind, so as to protect against mental influences. The protective Golden Aura. How to protect your emotional nature from undesirable vibrations. The Great Auric Circle of Protection. The oldest occultist’s instructions regarding building up of the protective Aura. How to fill the aura with vibrations of health and physical strength. How to protect yourself from the low passions and feelings of others. The Aura of great moral teachers. How those in ignorance of occult laws have been led from the moral path. The Auric Circle of Protection. The crumbs of teaching scattered through this book, other than those concerning the Aura. Those for whom these teachings are intended will recognize and appreciate them. A shelter for soul, mind and body against psychic influence. An infallible Armor against all force of attack. The Great White Light. Words from the Master.