New Earth Peru Blog: The Impracticality of the Practicalities 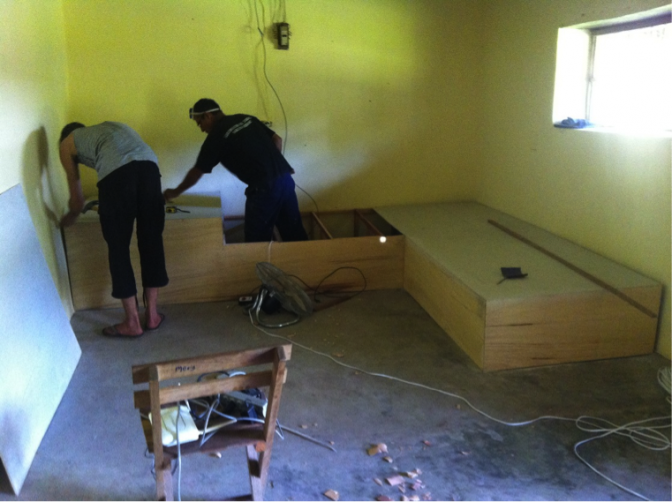 Today I’d like to try to paint a picture of the ‘practicalities’ of life here in Aguano Muyuna… you see, nothing comes easily here – you need to work for it… Where we have just moved from, Bali, we had thought that it too had its challenges when it came to getting stuff done, and it does – but Aguano Muyuna offers a whole other level of complexity.

So imagine for a moment that you move in to a dank grey box 14 days before your wife is due to give birth and you need to make it into a nice home, what’s the first thing you’re going to get for your goddess to make her comfortable? Well for us, it was a sofa!

Having been spoilt with the acres of sofa at our place in Bali (by that I mean Sacha’s place in Bali), a pokey two-seater sofa was never going to cut it, so I decided we would build one ourselves… it’s a simple job really – build a box to your preferred dimensions, buy some big sheets of foam, and procure some fabric (and a lady with a sewing machine) to make the foam look pretty. Here’s what that simple job actually took here in Aguano…

First of all, the carpenter, and wait for this… doesn’t have any wood! If you wish to utilise his services, you need to give him your own wood. Fortunately at the precise time that we needed some wood, a man with a big log turned up and sold it to me (which proved to be ample for our frame-building needs), but we still needed plywood (to cover the sides) and cement board (to cover the top). These items are fortunately available in Chazuta (only 15 mins away) so off we went in Jamil’s car to get them… But buying things here is one thing, getting them back to where you want to use them is quite another… As you return home, the car will only take you so far – once you’ve parked up, you have about half a mile to cover before you get back to your house, and in that half a mile you need to navigate two flights of steps, two beaches, one quite violent river in a very small boat, followed by a 350m jaunt to the house. In this instance we had to make the trip with about 60 kilos of 2.4m cement board, two sheets of plywood and a fair amount of other ‘consumables’! Likewise with the foam and fabric – these came from Tarapoto (about an hour away) – and like everything else were hard won… you see, despite the fact that almost every mattress in town is made of foam, there are no foam suppliers! So what I had to do was buy two foam mattresses and cut them into pieces that I could use as cushions. These too had to be carried over the river etc etc (in fact almost EVERYTHING you use, you need to obtain and transport in this manner – think about that for a moment).

So you’ve got your materials, now what? Well the sofa I had designed was relatively simple to build, or so I thought… All that was needed was a timber frame covered with the boards I had procured – what could be simpler than that? But the carpenter didn’t want the responsibility of designing the frame himself, so I had to give him the dimensions of every one of the (150+) pieces of wood and tell him how and where to fix them together! We also had to cut the foam (with a machete!), help him cut the cement boards and plywood to size, and then, when it came to assembling it all in the house, build it with him. And this is all before the drama of covering the cushions, which had to be done twice), had even began…

The point being – doing anything at all takes a lot of effort here, but doing anything which isn’t normally done takes a whole lot more… What that says about the project, time will tell!

As I write, I realise that I haven’t updated you on the ‘poltergeist’ activity I reported a few weeks ago… in the end it was really just the first two days that were particularly bad – it began thereafter to tail off as we poured more and more love in to the place, then about 2 weeks after we moved in, we had the place professionally cleared, and we haven’t heard a peep since.

It turns out that the house’s former occupier was a school teacher, and the story we have been told by a couple of the locals is that he was paying one of the mothers to fiddle with her daughter (same shit, different place). The entity (or rather what turned out to have been two entities) were deviant beings who attach themselves to that kind of energetic. It would appear to be the reason why Maia and I were so affected, and Emma was not, and the reason why it began to subside on its own after just a couple of days when they realised that we were simply not corruptible in that way. Regardless, I consider it a good omen that all this has occurred now – that these energetic vampires chose to attack us with all they had rather than hiding in the shadows and chipping away over time, only means that we get to clear the way faster for this project to emerge.

And having borne countless etheric attacks over the last few years from thousands of entities (as we have driven the New Earth Project forward), we’re kinda used to this – in fact it has become a normal part of our lives, and one which we’ve learned has zero effect when you remain dead centre, so all in all this couldn’t have played out any better.

Anyway, I digress… the practicality issues do not stop with sofas or building things… they extend to every aspect of life here. Nothing is available in the local area (even things like bananas and oranges which they grow in abundance can be hard to come by as the villagers have become so used to growing their own staples, for their own family consumption, that the concept of ‘selling’ them is alien). And when it comes to green vegetables, even the nearby city of Tarapoto only sells, at best, a token cabbage or head of broccoli!

So this project is very much a starting from scratch exercise in self-sufficiency arising largely out of necessity, as we can’t really get anything from anywhere!

Even coffee – which every family grows and harvests – is difficult to come by… You can get the coffee easily enough (although it did initially take us about a week to get our hands on a ready supply), but you will need to remove the skins, roast it and grind it yourself before you can begin to think about drinking it.

I could go on offering examples of the unabashed inefficiencies of life in Aguano Muyuna, but there is little need – the point is that we have to start from scratch with everything; to build pathways which transcend all obstacles… and I for one couldn’t be more excited by the prospect!