The Future: After Disclosure (AD) 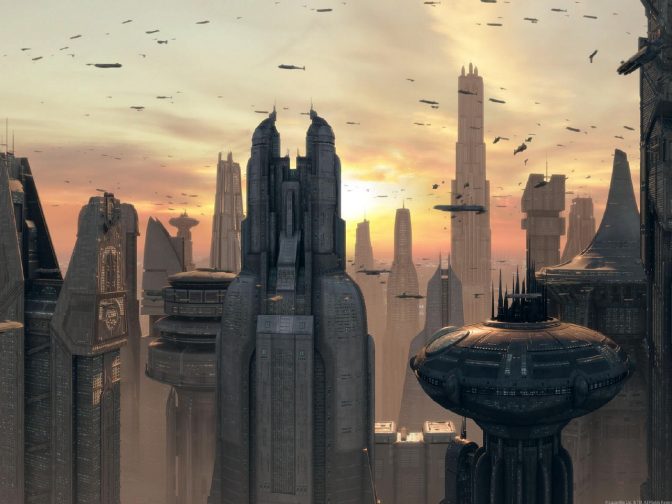 Coruscant from the Star Wars films is a hub so to speak for the representatives from around the galaxy to meet and make decisions for the greater good.  It’s the focal point for the democracy of the elected representatives to speak on behalf of their people and their planets.  The closest thing we have to compare with this here on earth is the United Nations.  Where members from their countries around the globe meet up and essentially attempt to do the same thing.

Aside from looking at the political aspects of this “City” planet I’d like to shift focus instead on the realization that this planet contains inhabitants from all over the galaxy.  There is absolutely nothing unusual about this notion.  Creatures from all walks of life roam the streets and fly their star ships on and off the planet daily.

I’ve read many books and articles pertaining to a future vision of our planet.  I also love to watch documentaries and even some of the movies and TV shows that have futuristic settings.  One thing that I find extremely interesting however is the fact that most of these presentations all assume that the humanity of the future will still be all alone in this vast universe that is filled with life.

To be a future visionary and a writer you must expand your mind and consciousness and also pay attention to the clues and evidence presented all around you.  Even though you may think that we have not yet discovered intelligent extraterrestrial life forms, you still cannot close your mind to the facts that are presented each and every day by NASA and the mainstream media.  Like the facts that new planets and even hundreds of earth-like planets in the habitable zone are being discovered each year.  If you are looking to the future you must realize that life beyond our planet will be discovered and that it’s inevitable.  To leave this completely out of your vision is not painting a realistic vision of what’s to come.

Take a look at this photo of Coruscant.  This paints a very clear picture of the future for humanity here on this planet.  Creatures from all walks of life from planets around the universe will walk openly upon the earth and fly their ships on and off the planet each and every day (Some are already doing this now and have been since the beginning of time).

The events that take place starting with the day of disclosure will forever change the course of human history.  This one event will become the single greatest event in the history of our planet.  This single event will touch upon every aspect of our daily lives.  Religion, Economics, Technology, Health, Unity and Consciousness, and the list goes on. I strongly recommend listening to this interview with Stephen Basset during the New Earth Nation Launch posted here below which touched upon this subject around the one hour mark.

Many great changes will occur after disclosure (AD).  When the entire world knows not only that alien life exists, but also the fact that we have been interacting with intelligent life forms since the beginning, people will have a much different outlook on themselves and our planet.  I am not going to write about those “evil” life forms and go into fear mongering.  Although I believe these creatures exist I will instead focus on those that could be millions of years more evolved spirituality, technologically and physically.  I will outline a few brief points here below about specific changes.  I could write an entire book on each of these subjects but I will simply touch on some key points.

This at first will cause quite a stir.  But I believe most of the major religions of the world have already begun preparing a statement for AD.  People will question what they’ve been taught and the response from the religious leaders will simply be that God created creatures all over the universe.  After things settle down the real shocker will come when major truths that have been withheld from us become known.  This will turn all major organized religion on its head.  Because we are all One this will remove separation and anything that involves a dualistic approach to God and mankind.  And maybe the true source of how we humans were created could also be much different than what we’ve been taught.

The biggest thing to touch on here is that with a little help from our new friends we will be taught how to live in a moneyless society.  The way society revolves around money and debt is barbaric.  Highly evolved beings can simply guide humanity on a path of simply working for the advancement of humanity and the betterment of our communities.  This notion of working for the profits of the few in a pyramidal manner will be the first thing to go.

Free energy devices will replace fossil fuels (This is already becoming a reality). Antigravity technology and new propulsion systems will replacement automobiles, trains, airplanes and other aircrafts currently in use.  If several sources I’ve read are accurate, we could also be looking forward to time travel and teleportation.  Replicators will become the norm and replace the killing of plants and animals for human consumption.  Anything you want to eat or drink will manifest instantaneously at the push of a button in these devices.

All known disease and illnesses around the world will be wiped out.  Using highly advanced methods such as sound waves for example people will be cured from everything.  Once we’ve reached a certain age we will stop growing older.  So anti-aging technology will keep us young and healthy.  Death will still exist but life expectancies will change drastically.  And at this point in time death will be understood and looked upon as a simple transition into the next dimension of existence rather than a very deep saddening occurrence.

There will be a profound shift in consciousness for humanity.  The 3rd dimensional role we are here to play in duality will come to an end.  Instead of being a Catholic, or American, or Democrat, or a white person, we will all become united as one species of humans on planet earth.  We will become “Earthlings” and realize that we must look after all of our brothers and sisters.  Instead of Russia against the U.S. it could be the people of Earth defending ourselves against a galactic intruder.

With the expansion of consciousness in this new role of “Earthlings” many of the aggressions over petty differences will cease.  Accompanied by the fact that there will be no more poverty, starvation and suffering, or lack in any stretch of the imagination.  Wars will end because they will not be necessary.  If you take away the need for money, organized religion and separation, the need for fossil fuels and natural resources what other purpose or reason would there be for declaring war?  We will have peace on Earth.

So now let’s ignore most of the futuristic visions we see today in books, documentaries, films and television and paint a more realistic vision of our future based on what we know today.  After disclosure humanity will take an evolutionary leap forward with the help of interacting with beings possibly millions of years ahead of us.

I envision a world that will look much more like Coruscant with life forms from around the universe interacting with our population on a daily basis. A beautiful and clean sky filled with Star Ships and visitors from everywhere.  Just think about walking down the street and walking side by side with creature’s appearances that go well beyond your imagination.  This will become a reality.  Much like when the mountain gorillas of Africa were discovered on October 17th 1902, humanity were first shocked at the discovery of these magnificent creatures but then their existence simply became “the norm”.

We are living in the most important times in the history of our world.  We are on the brink of a discovery that will become known worldwide and will instantly change the direction of our future.  Visionaries can only dream of what this new world will look like after disclosure.  My impressions are that it will go well above and beyond any of the wonderful expectations our current minds and consciousness can possibly envision.