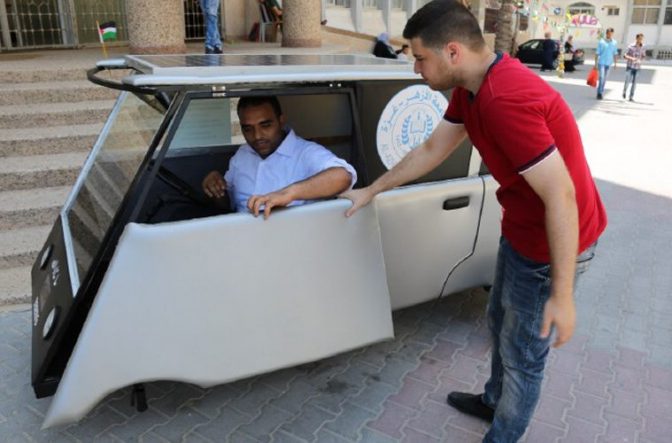 Two students from Al-Azhar University in the center of Gaza are redefining energy limitations that have plagued the area for years.

Working with the institute’s Mechatronics Engineering Department, Khalid al-Bardawil and Jamal al-Miqaty, who are engineering students, have created a vehicle that runs off solar panels on its roof with a very limited budget.

“Electricity [powered] motors are not available in our city and unfortunately nobody knows how to make them,” explained Al-Miqaty to reporters, adding, “we had to [get] a motor and make a lot of changes to it, and these changes were not easy to make.”

The blockade of the Gaza Strip, which refers to a land, air, and sea blockade on the Gaza Strip by Israel and Egypt from 2007 to present, continues to infringe on the wellbeing and rights of those living in this Palestinian territory along the Gaza Strip. It’s also suffocated the area of necessary resources like fuel.

Jerusalem authorities are in control of much of the energy sources and supplies in Palestine by way of its Israel Electric Corporation, as well as heavily restricting imports. And while the setbacks have proven detrimental to Palestinian residents, not all of them are willing to accept such a fate.

With a shoestring budget, the two students from the Islamic Al-Azhar University, are proving that just because fuel is often difficult to come by in Gaza doesn’t mean there aren’t other options.

While Palestinians continue to suffer from an energy crisis, including only receiving a mere 45 per cent of the electricity it needed last year to sustain its population, which the United Nations credits as an Israeli airstrike on the Gaza’s only power plant in 2006, the students’ solar car prototype gives new hope.

The three-wheel solar-powered vehicle, despite only being able to reach a top speed of 18 mph, showcases an innovative approach to tackling the unjust restrictions on daily life experienced by the Palestinian territories.

According to a statement by Al-Azhar University, the bright idea to construct a solar-powered car was sparked by the “chronic electricity deficit” and “diesel shortage” plaguing Gaza.

Gaza’s sole power plant in Nusairat has suffered severe fuel shortages that have left the Gaza Power Plant operating at scarcely half its capacity, even being forced to shut down numerous times. In January, for instance, cold weather caused gas deliveries from Israel into the Palestinian-controlled areas to be cut by half. And in April, the plant was closed after a tax dispute with Palestinian authorities.

The 23-year-old students built the solar car from scratch as a final exam project. Their prototype, a two-seater car, equipped with two photovoltaic panels, one on the roof and one on the rear, that use solar energy and transform it into electricity to provide the car’s small engine with energy, may, indeed, be the beginning of a major breakthrough for the affected residents.

“By building this vehicle, we wanted to introduce a prototype as some European universities did. We wanted to spread awareness and the culture of using solar power through these projects. We made this project and it is the first in the Gaza Strip, to design a vehicle from A to Z which works on solar power,” Amer explained.