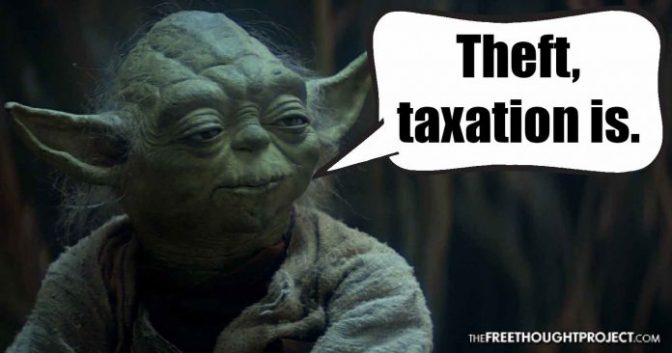 A groundbreaking new organization proposes multiple compelling arguments in answer to one of the most pivotal questions of our time:

What if the Government had to earn your money?

If it did — if everything from education to healthcare, law enforcement to charitable giving, to even the sacred social safety nets and retirement programs — it would function in your best interests, the Tax Revolution Institute contends, since the inane bureaucratic nightmare that is the current government strangles all semblance of efficacy from the system.

What the Institute, in actuality, candidly asks, is for individuals to step back and assess,

Is the government you fund through coercive taxation worth the price you pay?

“What if you could redirect your tax dollars whenever you saw them wasted by a government department; spent in support of a policy that does more harm than good; paid out to cronies for supporting a particular politician or campaign, or just deployed much less efficiently than by a local charity or non-profit that does a particular government job better than the government does it?” the Institute’s website asks.

Further, considering how mired in its present state of odious inertia this superfluously bureaucratic State has become — and in light of resistance to drastic, immediate change — do smaller reforms to the current tax system even offer a viable solution?

What if private organizations, non-profits, religious institutions, businesses, wealthy individuals, volunteers, and cooperatives provided assistance better befitting entrepreneurs, laborers, the impoverished, the jobless, teachers, the houseless, innovators, or anyone with a specific or general need — without costing taxpayers hard-earned income they’d rather not allocate for such programs?

At present, an insidious web of laws, regulations, endowments, subsidies, and other rules and perks has so infected the administrative structure of the government, its most efficient function is interagency back-patting. But, stripping the red tape from a foundation will do little to improve mushrooming social issues that might otherwise be alleviated by a dynamic network unassociated with the State.

A sizeable segment of readers probably raised eyebrows or rolled eyes at the mere suggestion private entities could be motivated by anything other than greed — or that the desire to amass wealth is inherently devoid of compassion — but the Tax Revolution Institute arrived on its mission by investigating societal issues through the lens of skepticism.

Before discussing a number of impressive solutions — many already functioning full steam ahead, sans interference — it’s necessary to understand the coercive nature of taxation, itself.

Because forcible taxation allows the State to allot your money as it deems fit — regardless of a program’s efficiency, effectiveness, quality, or results — and you have no recourse for misallocated funds. Your money will be spent — you just don’t have a say so.

Besides rampant corruption facilitated by decision-making for the many concentrated in the hands of the few — and the accessibility that concentration provides mega-corporations and monied interests — the tax system diverts charitable funds as a middleman before the money reaches its target.

“Since people cannot send their tax money elsewhere,” the Institute’s website states, “organizations that would address social needs more effectively or efficiently than government agencies are either underfunded or never see the light of day. Moreover, that lack of competition prevents us from fairly judging the effectiveness of government solutions against all of the better solutions we’ve been prevented from having, so the quality of those government solutions falls unchecked.”

Where businesses and charities not tied to the government must deliver quality services to satisfy funders and compete with similar organizations — primarily by cutting waste and reducing inefficiency — government agencies, saddled with a steady and ever-increasing influx of funding, aren’t beholden to pragmatism. Government bookkeeping is a notorious fiasco.

Of all the kinks in the tax system as it exists today — an expansive list that could subsume countless volumes — the issue, at its core, is the lack of voice taxpayers have in the spending of their income.

However, the Institute posits,

“If you could redirect those tax dollars, the result would be revolutionary: there would finally be an incentive – indeed, a need – for politicians and public servants to clean house, to make sure that your tax dollars were doing justly and effectively what they were taken from you to do.”

Travelers Group announces an agreement to undertake the $76 billion merger between Travelers and Citicorp, forming Citibank.

First performance of Arthur Sullivan’s debut success, his suite of incidental music for The Tempest, leading to a career that included the famous Gilbert and Sullivan operas.

Our tax system is deemed voluntary — for now, in name, alone. Taking that description to heart, a truly voluntary tax system offers an unending plethora of options for channeling your money the way you see fit. For example, the Institute suggests,

“Putting choice into our system is the only way to ensure better services, delivered more efficiently and more accountably, to the people whose wellbeing is the only reason for taking their tax dollars in the first place.”

Although the idea might be difficult in a nation whose recalcitrance drowns out the loudest call for sweeping reforms, wresting your own money from the State’s bureaucratic and regulatory quagmire and directing it to programs of your choice hardly constitutes radical engagement.

In fact, that sentiment can be reduced to a single, virtually indisputable idea:

“The tax system should serve the people,” the Tax Revolution Institute asserts, “and not the other way around.”

How to make that reality — as seen in the number of groups already subverting the ailing system — will be a pleasant surprise discussed in Part Two of this two-part series.

And as the Institute points out, the issue of taxation and inefficiency has nothing at all to do with partisan politics, rather,

“This is emphatically not a political project. It is a human one, and it is a humane one.”