Breaking: 27,000 Forced to Flee as ‘Out of Control’ California Fire Explodes 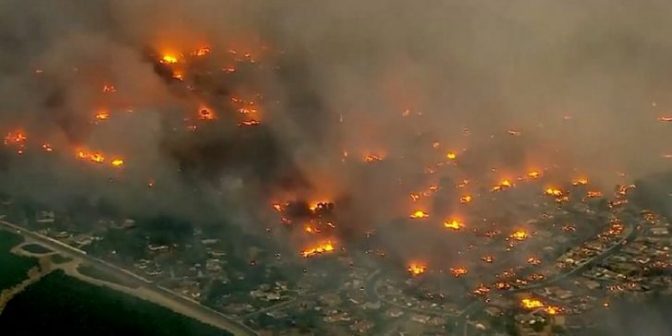 (ANTIMEDIA) Ventura, California — A massive fire is plaguing Ventura County, California, and due to strong winds, remains uncontained as of Tuesday. The fire has burned over 45,000 acres and prompted 27,000 evacuations.

The blaze has been moving east, aided by winds between 35 mph and 45 mph. This “red flag wind advisory” also has gusts up to 70 mph, though Chad Cook, Ventura County Fire Department division chief, said he hopes they will die down Tuesday afternoon.

For now, however, the Los Angeles Times reports that “fire officials said the intensity of the fire, coupled with the high winds, made it pretty much unstoppable.”

The red-flag wind advisory has been in effect for southern California since Monday, with the Santa Ana winds blowing stronger and longer than they have all season, according to the National Weather Service.

As a result, Ventura County Fire Captain Stan Ziegler was not surprised at the growing fire. “This is exactly what we have prepared for,” he said. “This is not a surprise by any means.”

In addition to evacuations, schools in the Oxnard, Ventura, Hueneme and Santa Paula districts have been shut down.  Roughly 260,000 customers in Ventura and Santa Barbara counties lost power, and though it has been restored for most residents, 20,000 in Ventura remain without it.

Though there currently are no confirmed human fatalities, one dog has reportedly died. Over 150 structures have been burned.

The Thomas fire is only the latest to hit California and the western United States in 2017. California has seen widespread wildfires up and down the state that destroyed thousands of structures.