Earth Now Has A Flag and It’s Awesome 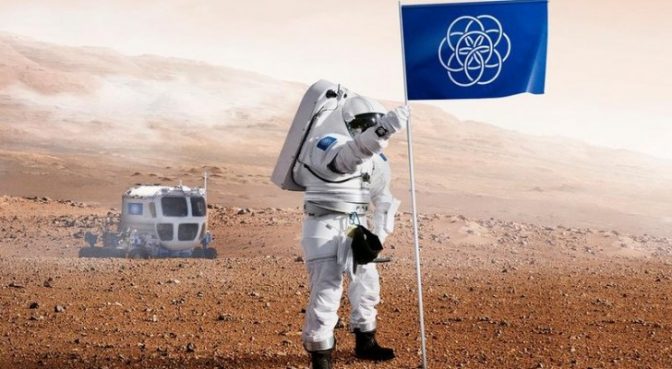 Would an international flag help contribute to a more unified global population?

This was something that Oskar Pernefeldt, a student at Beckman’s College of Design in Stockholm, Sweden, wanted to explore, creating an international flag design for our humble galactic home, Space.com reports.

The flag’s design is simple: 7 white circular rings interwoven onto an ocean blue background – a symbol that Pernefeldt says could mean a few things.

“The blue field represents water which is essential for life – also as the oceans cover most of our planet’s surface,” describes Pernefeldt on his website.  “The flower’s outer rings form a circle which could be seen as a symbol of Earth as a planet and the blue surface could represent the Universe.”

The flag is intended to remind people that we all share planet Earth, regardless of nationality, Pernefeldt said.

“Current expeditions in outer space use different national flags depending on which country is funding the voyage. The space travelers, however, are more than just representatives of their own countries. They are representatives of planet Earth.”

To help stimulate our imagination, Pernefeldt put together a set of stunning visualizations that showcase how and where this flag could be used in our world today.

While it seems there are no current plans for space agencies to use the international flag, the project adds hope to a future without imposed borders and cultural and religious division. Be sure to check out Perenfeldt’s project video below for more about his vision.

What are your thoughts on the proposed world flag? Share with us in the comment section below!