What Does An “EXPANDING Universe” Really Mean? 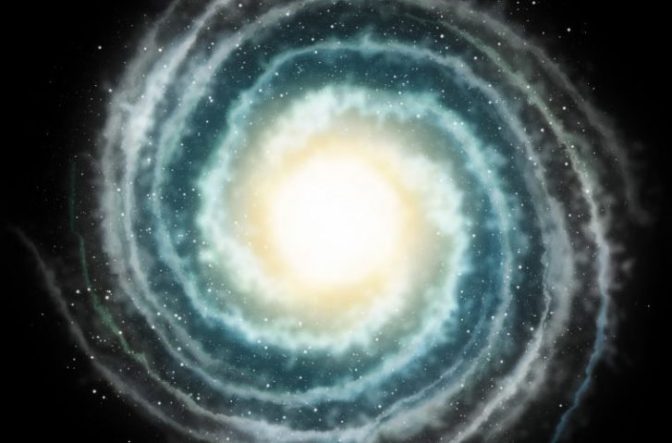 It’s generally assumed that the universe — all existing matter and space considered as a whole — is at least 10 billion light years in diameter, and contains many, many galaxies. Since its creation in the Big Bang an estimated 13 billion years ago, the universe has been expanding.

As if it weren’t enough to just try to wrap your head around the idea of the universe, why not try to consider that it just keeps growing?

In an article for NPR, Marcelo Gleiser, the Appleton professor of natural philosophy and a professor of physics and astronomy at Dartmouth College, says:

From our everyday perspective, when we see something expanding, we immediately also see what it’s expanding into. An inflating balloon grows outwards into the space surrounding it. We can easily picture this because we are seeing things from the outside. We see the balloon and its surface growing as air is pumped into it. This is the privileged observer’s view, one where we have a detached and complete grasp of what’s going on, a view “from the outside.”

However, this universe isn’t a balloon, and we are not watching a balloon expand from an outside perspective. We are, as Gleiser points out, trapped inside of what we are trying to better understand. And so, we must measure cosmic expansion from within. The measurements we currently have of the universe reveal it to have a nearly flat geometry. This means that the universe is very likely infinite, since, unlike in curved geometry, where the rays of light trace a curved path, a flat geometry means the rays of light travel on a straight line across space. “If you’d start moving on a straight line, you’d never come back to where you started. (In a spherical geometry, if you move, say, along the equator, you’d get back to your starting point.),” explains Gleiser.
But exactly what is the universe expanding into? Nothing, really. In fact, there isn’t any space out there for it to expand into. To understand the expansion of the universe is nothing more than to understand that the cosmic expansion stretches space itself. Essentially, there is no physical border, because it is infinite.
And exactly how fast is it expanding? According to astronomers, the universe’s current expansion rate, known as the Hubble constant, is about 70.4 kilometers per second per megaparsec. (One megaparsec is about 3.3 million light-years.)
Even more interesting, the universe has no center. Every point is a center of the expansion. Everything is moving away from everything else. The universe encompasses everything from the smallest atom to the largest galaxy, and because everything has always been moving away from each other, it is likely that there is much more out there we can’t see anymore because these things have moved away so fast that their light never made it to Earth.

Currently Nassim is focused on his most recent developments in quantum gravity and their applications to technology, new energy research, applied resonance, life sciences, permaculture, and consciousness studies. Nassim currently resides in Kauai compassionately raising his two young sons, and surfing the sunlit swells on the shores of the magnificent Hawaiian islands.

HERE is an example of some of his published research, with co authors, one of whom is Elizabeth  A. Rauscher, an American physicist. She is a former researcher with the Lawrence Berkeley National Laboratory, Lawrence Livermore National Laboratory, the Stanford Research Institute, and NASA.

“Space is actually not empty and it’s full of energy…The energy in space is not trivial there’s a lot of it and we can actually calculate how much energy there is in that space and that reality might actually come out of it. Everything we see is actually emerging from that space.”

When it comes to the big bang, he commonly uses this diagram to explain that there are more questions. Like, who is behind the big bang?