In This Incredible City People Live With No Politics, No Religion And No Money 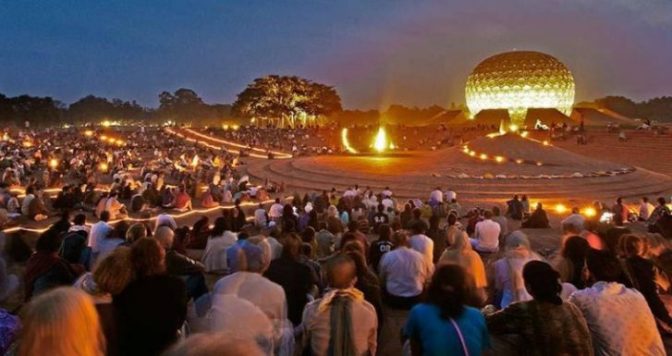 The city’s name is Auroville, and this utopian township allows men and women of all nationalities to reside in peace and harmony. Here, human unity is allowed to flourish.

Founded in 1968, Auroville, or the “City of Dawn,” was named an international city by UNESCO, with its inhabitants hailing from more than 50 nations and different cultures.

So often we focus on the differences that divide us, whether they be political, economical, or spiritual, and create boundaries as a result. But at Auroville, there is no need to raise walls between people, because there are no restricting systems. There is no money, no religion, and no politics. And so, people are able to peacefully coexist.

Instead of a government, self-formed committees run the town, and rather than money, there’s the “Aurocard.” Alcohol isn’t sold inside Auroville, and cars are banned from entering its roads. But no rules are actually enforced, as there isn’t an official government or police force. Instead, the city relies on a system of trust between residents.

Topics like this were something that intrigued us greatly while creating our most recent documentary CE3: The Shift, you can watch a free screening here.

Proposed vision for the city.

The utopian vision for Auroville came about from spiritual leader Mirra Alfassa, known as the “Mother” of Auroville. She drew the first plan for the city in 1960, dividing it into four zones: industrial (organic farms), cultural (shops and businesses), residential, and international (areas for visitors).

That same year, French architect Roger Anger transformed her vision into a masterplan consisting of a spiral of homes, public buildings, farms, and forests. Since then, outside organizations have begun projects to progress Auroville’s original vision. Architect Anupama Kundoo, for instance, has designed Lego-style houses for residents, and the architects from the Auroville Design Consultancy have drawn up over 20 public spaces for the city, such as kindergartens, libraries, resorts, and homes. While many have yet to be built, the intended projects revolve around human connection and environmental sustainability.

This peaceful, anarchic community seeks to be a sustainable eco-city, where multi-cropping, combining fruit trees, cornfields, and orchards, organized into 15 farms and spanning an area of nearly 2.5 acres, ensures there is plenty of food to support the population. Fifty villagers and 300 neighbors work on the farms, producing 2% of rice and cereals consumed and 50% of vegetables. The village is also self-reliant in milk and dairy products, as well as seasonal fruit. There are many other projects run by Aurovillians, from schools and IT to renewable energy and handicrafts production. As a result, 4,000 to 5,000 people are employed from nearby villages.

It seems outside opinions of Auroville vary, from respect and admiration to the suggestion that its residents are merely taking part in self-indulgent escapism. Almost 60% of the residents here are foreign, while most new members require more funds than the majority of people in India are likely to ever have. And except for the non-existent government, many would argue Auroville doesn’t resemble the envisioned plan for the city.

Even the city’s website acknowledges this, but proclaims it is actively working on getting there. Yet to see that a break in the system has occurred, and that there are people looking to make it a tangible reality, is incredibly telling of the desire so many of us have, deep down, to be free of the restrictions we’ve come to view as normal.

There should be somewhere on earth a place which no nation could claim as its own, where all human beings of goodwill who have a sincere aspiration could live freely as citizens of the world and obey one single authority, that of the supreme Truth; a place of peace, concord and harmony where all the fighting instincts of man would be used exclusively to conquer the causes of his sufferings and miseries, to surmount his weaknesses and ignorance, to triumph over his limitations and incapacities; a place where the needs of the spirit and the concern for progress would take precedence over the satisfaction of desires and passions, the search for pleasure and material enjoyment.

In this place, children would be able to grow and develop integrally without losing contact with their souls; education would be given not for passing examinations or obtaining certificates and posts but to enrich existing faculties and bring forth new ones. In this place, titles and positions would be replaced by opportunities to serve and organise; the bodily needs of each one would be equally provided for, and intellectual, moral and spiritual superiority would be expressed in the general organisation not by an increase in the pleasures and powers of life but by increased duties and responsibilities.

Beauty in all its artistic forms, painting, sculpture, music, literature, would be equally accessible to all; the ability to share in the joy it brings would be limited only by the capacities of each one and not by social or financial position.

For in this ideal place money would no longer be the sovereign lord; individual worth would have a far greater importance than that of material wealth and social standing. There, work would not be a way to earn one’s living but a way to express oneself and to develop one’s capacities and possibilities while being of service to the community as a whole, which, for its own part, would provide for each individual’s subsistence and sphere of action.

At Auroville, human relationships are not meant to rely on competition and strife, but rather on unity; to appreciate each other’s ability to do well, and use that as a driving force to create a community that does well.