Living Off The Grid: The Story Of One Man Building A Dream Cabin For His Bride 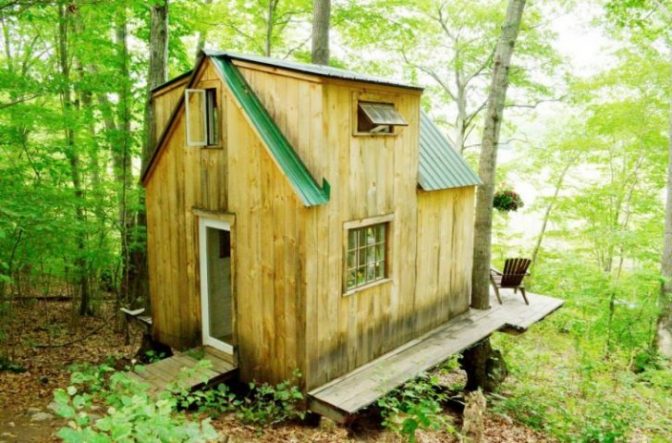 Unplugging has become a mental and physical metaphor in recent years. Perhaps because we live in a world where we are afraid to live without our phones, our favorite TV shows, and the luxury of the mindless switching on and off of that which gives us light, water, heat and so much more. But, to have all of these things, we work hard to pay the bills and lose site of something that is much more meaningful: a connection to the earth. We no longer have to pick up a book to read it thanks to things like iPads, Kindles, and other devices which allow us to read and research words in seconds. A concrete dictionary is a thing of the past. Information is given to us through search engines as opposed to experience. Is this good? Is this bad? Perhaps it’s just different. Nonetheless, there is a giant movement happening that is causing people to escape societal confinements and yearn for the earth; for learning; for understanding; for simplicity.

Living off the grid is just one way people are opting out of the norm and getting cozy with the idea of living from the ground up. The term has come into play much more frequently than one might imagine in recent years. To live such a way, you are forgoing the requirement of utilities like water, electricity, sewer, heat, and natural gas. Living in a home like this means you require zero assistance from public utility services. And there are a variety of ways of doing it, from urban homesteading to living in the desert, to getting high up in the mountains.

And there are great minds who inspired many. Henry David Thoreau helped to pave the path of self-reliance and wilderness living with his writings in Walden, while Richard Louis “Dick” Proenneke lived out Thoreau’s thoughts, building his own Twin Lakes cabin with his own homemade tools that would go on to intrigue and inspire people in his documentary, Alone in the Wilderness.

Today, people are undoubtedly continuing to find inspiration in this style of living. David Herrle, from Westbrook, Connecticut, and his wife wanted to live a more sustainable life, so Dave built his beautiful bride a cabin in the forest.

To construct the 11×14-foot cabin, David utilized recycled materials. Many people find themselves buried in debt after extensive residential endeavors like building a home, but the total cost for this dream home came in at only $4,000. People also find that the time it takes to finish such a project takes its toll, but this adorable abode was completed in just 6 weeks. The home comes complete with a kerosine heater to keep it warm when needed and a composting toilet, which cancels out the need for a septic tank.

A grandiose gesture to say the least, the story behind how Herrle became fascinated with this style of living doesn’t stem from his hard-earned career as a carpenter who knew his craft would lead him here easily. In fact, Herrle was never a professional builder by any stretch of the word. Stuck in a desk job after graduating college, the young man found himself hating his position and environment, and so he hiked the entirety of the Appalachian Trail in 2007, where he realized his true calling: to live simply. He then made his home in the Wee House, where he found the benefits of constructing things by hand, which continues to guide him into reaching his most desired goal yet: becoming wholly self-sufficient.

Take a glance at the beautiful cabin in the video below:

All Images: Living off the Grid