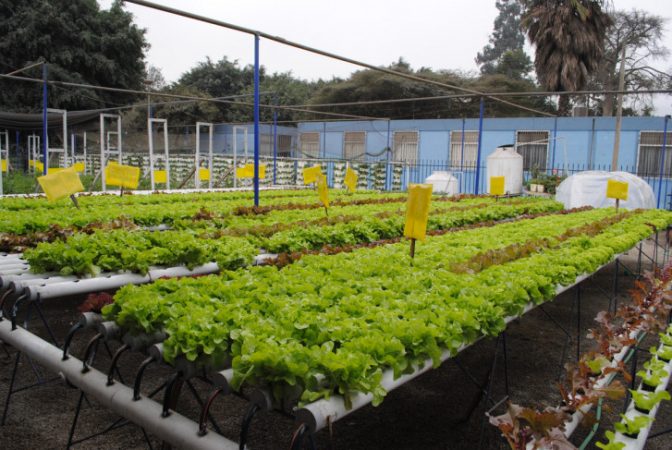 Simplified hydroponics is a vegetable production method that utilizes modern day hydroponic technology adapted for areas with limited resources. This technology is based on minimal inputs, requiring no pumps, energy, or expensive equipment. The gardens are built with recycled or discarded containers, hand watered once a day with a commercial hydroponic nutrient. Recipes also exist for making an organic nutrient at home. The technology is explained in a new book by Peggy Bradley and Cesar Marulanda , “Home Hydroponic Gardens”.

In 1985, a hydroponic project supported by the United Nations Development Project (UNDP) was established in Jerusalen, a community on the outskirts of Bogota, Columbia. Designed by Colombian mechanical engineer, Jorge Zapp, the project used hydroponic growers, made of small containers and discarded wood pallets, placed on rooftops, balconies, stairs, and any available space in the sun.

Participants in the project included 130 urban poor families, with 90% of the participants mothers and homemakers. The women earned as much as three times more than their husbands earned in semi-skilled jobs, and provided food from the families from overripe or less than perfect crops. They produced 30 types of vegetables in their hydroponic gardens.

The gardens were built of donated or recycled materials including rice bran from a mill, wooden crates from an auto parts shop and recycled polyethylene from commercial flower growers. The costs of setting up each square meter plot was less than $5.00.

Pallets were set flat on the roof and the top slats were removed. Plastic sheeting was placed inside and the rice bran was used as media. Hydroponic nutrients were supplied by the funding agency at a cost of about $9.00 per year, or about 2.4 cents a day.

Families sold surplus produce to a supermarket cooperative under a contract established by the funding agency. Once week produce was brought in, weighed, and pay was given in cash.

The Jerusalen project serves as highly successful hydroponic garden for developing countries. It shows that hydroponics can be a viable solution to extreme poverty. The fact that the project appeared to fail when nutrient and sales organization was withdrawn does not make the project a failure. One only has to speculate what would happen to existing US agriculture if all funding, subsidy and marketing support were withdrawn, suddenly, with very little warning.

Cesar Marulanda, the United Nations Director who supervised the hydroponics projects explains, “The problems that there are with popular hydroponics in Colombia and in the other 15 countries where we have initiated under my direction, are not of agricultural or technical nature.

“It is that the attitude of the people who accept themselves as beneficiaries. The process should be a matter of business, with business principles taught, so the recipients see the project as a productive company rather than a donation. It is very important to give precise information on the fundamental objectives of a hydroponics company.

“In the technical part the most frequent problem is the distribution of the inorganic nutrient so that all the beneficiaries can buy it in all the places. Presently these nutrients are not sold by the traditional retailers. Also there must be constant technical consultant’s office in the first phases of the project.”

“Even though hydroponic culture is easy to learn, the people are often timid to make decisions and need support when the first problems appear to them that are of easy solution.”

A hydroponics project for high school students had been developed by Biologist Alfredo Rodr?quez Delf?n, a professor at Universidad Nacional Agraria La Molina in Peru.

Each school builds a hydroponic garden, built of wood pallets, boards, black plastic and garden hose. The garden occupies 10 to 12 square meters of surface space and costs about $100.00 to build. The costs per grower are about $10.00 and built of recycled or discarded materials.
The La Molina garden utilizes discarded wooden pallets as a base for the garden containers. The pallets come in either 1m2 or 1 by 1.5m2. The 1m2 pallet is about 15 cm deep and costs about $2.50.

Once constructed the growers are filled with a growing media. The growing media used in the Lima area is sand gathered from a waterway or collected from sandy soils. In areas outside Lima, rice hulls are also used. Both sand and pebbles can be used through several rotations of crops without being replaced.

After the seeds have been planted, growers are watered every day except Sunday. A two-liter plastic pop bottle with holes punctured in the bottom is used to sprinkle nutrient water over the grower. During the summer, six or eight bottles of water (6-8 liters) are usually required, and in the winter, one or two bottles (2-4 liters).

Alfredo disagrees with the idea that expensive testing and monitoring equipment is required for little hydroponic gardens. “We do not teach the students or community members about pH. They have no equipment to check pH or electroconductivity of the nutrient solution. The teachers understand pH, but it is not a part of the hydroponics instruction for the garden owner.”

Alfredo sees real promise for home hydroponic gardens in Peru. “We hope to continue our work to improve the lives of the people. We also wish to continue commercial projects and social projects. Our small home hydroponic gardens help people produce their own vegetables or to produce vegetables for sale to improve their incomes.”

A hydroponic curriculum has been established at an elementary school in a rural African village. The village has no running water or electricity. The project was funded by Carbon Quest, a US non-profit organization and Japan’s Council of Governments. Established as an educational project for the community, teachers and students at St. Werburg’s school, the project has become a model for villages in the surrounding area.

In the fall of 1996, Teachers’ Kits manufactured by Bradley Hydroponics were donated to third and fourth grade teachers of St. Werburg’s Elementary school. The teachers attended a training workshop, learned about hydroponics, and then completed the experiments in the teachers kit curriculum.

The teachers kit is shipped in a plastic tub, which serves as a small hydroponic grower. The tub has a hole cut in the side, about 1.5 inches from the bottom, and a drainpipe is placed in the hole to allow overflow water to be collected in a container below. The tub is filled with propagation grade perlite.

The first experiment grows beans in a tub grower filled with perlite using inorganic nutrient water, and a bean plant grown in soil in the ground. The soil-based beans usually grow much slower than the hydroponic plants and use much more water, sometimes 20 times as much. For a people that often have to carry water for long distances, this is a real revelation.

In the next experiments, the students change one part of the system at a time. After testing four types of growing media, the students are encouraged to try other things. They can ask for help from anyone in the community. With from 90 or more students using a variety of media, usually a few media are discovered that are optimal and locally available. The next experiments test different types of containers and inorganic nutrients.

By having early success with an optimal hydroponic system, the students use a scientific approach of doing experiments changing only one thing at a time. With so many students trying different things, usually suitable materials are found. At the completion of the curriculum, a technology should be established that is built of local materials.

The success of the St. Werburg’s project is probably dependent upon utilizing organic nutrients. The average wage of the agricultural worker in St. Werburg’s ranges from $10.00 to $20.00 per month. Also, fertilizers, when available, are very expensive. Wages barely cover the cost of corn meal with little extra money to buy an inorganic hydroponic nutrient.

Although each garden design evolved independently, there are many similarities. All three gardens are hand watered, and do not require water pressure or mechanical devices. Each garden is built of inexpensive materials, and can be constructed in a matter of hours.