10 Breathtaking Places You Need To See Before You Die 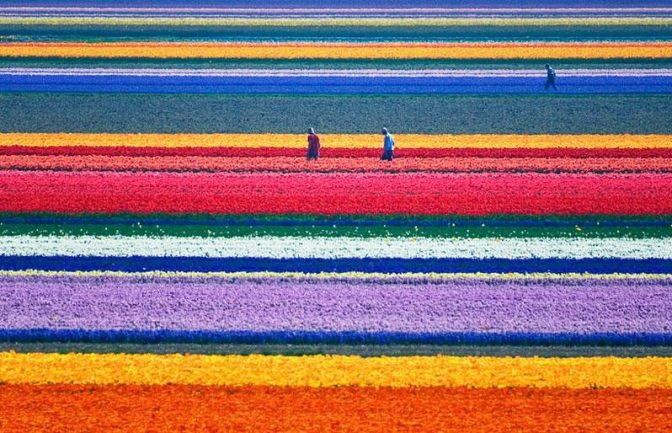 Planet Earth is a playground of natural beauty, with perfection embedded in all corners of its landscape. Each country possesses unique topographic features which inspire travelers from afar to set out and survey the wonders of the natural countryside. We’ve put together a list of 10 spots you must have on your travel bucket list for reasons of simple astonishment.

If ‘somewhere over the rainbow’ really existed it would probably look like this. Fields of multicolored flowers have been planted in Anna Paulowna, a town in North Holland, attracting a magnitude of sight-seers every year during the wondrous blooming season. Millions of flowers laid out in horizontal, parallel and perpendicular strips make up a mega-quilt of blossomed beauties.

Salar de Uyuni might be considered the world’s largest mirror. Stretching nearly 11 000 square km across central Bolivia, it is the world’s biggest salt flat. After the rain falls and the water has settled, the ground at Salar de Uyuni reflects a perfectly clear image of the sky above, creating a dream-like world and giving the illusion of visitors and vehicles treading on water. These salt flats lie at the top of the Andes, at an elevation of 3650 m. The area also holds half the world’s supply of lithium.

Hitachi Seaside Park may have been Dr. Suess’s inspiration for some of his infamous landscapes. This flower park stretches 3.5 hectares and attracts visitors because of its various collections of peculiar flowers. It boasts over 170 different tulip and flower varieties, overlooking a panoramic view of the Pacific Ocean. The Blue Nemophila is one popular flower which blossoms every spring (4.5 million of them to be exact).

Perhaps your next vacation will stray away from traditional sunny weather hot spot taking you to the frozen glacier lands of Alaska. The Mendenhall Ice Caves in Juneau possess an esthetic like no other; underneath the glassy surface of the glacier hides a frozen wonderland. Streams from the nearby mountain slip into the burrows carving out a magnificent hiking attraction. The cool blue hue will have your jaw-dropped in all its glory.

If you need somewhere to manifest your personal Zen, this Arashiyama bamboo forest outside of Kyoto, Japan is the place to do it. Gentle sounds of the swaying bamboo trees accompanied by the emerald casted light create a serene walking trail for peace goers. Bamboo is considered more durable than most metals, having the ability to survive earthquakes with magnitudes up to 9.0.

900 Ft within the mining caves of Mexico lies some of the world’s largest gypsum crystal deposits. Known as “Cueva de Los Cristales”, cave of crystals, some of the massive growths extend up to 12 meters long and weigh up to 55 tons. The cave formed from super-heated anhydrite which filled the chambers eons ago. After the anhydrite began to dissolve it enriched the waters and caves and allowed for the mega-crystals to form. High pressures and temperatures make it difficult for people to explore the caves, requiring a special suit to wonder into its depths. You wouldn’t want to make a slip in this cave.

Look familiar? These colossal pedestals resemble scenery witnessed in the mega blockbuster Avatar. In fact the special effects team visited the Hunan mountain region of China during pre-production, using one of the columns as a proto-type for the Hallelujah mountains in the film. On the top of the mountains, one can have a bird‘s eye view of numberless inter winding hills and deep valleys of the Wulingyuan area as well as downpouring waterfalls and lofty old pines in drifting mists and clouds.

Hang Song Doong holds the title of the world’s biggest cave. Millions of years ago rivers which extended underneath the mountain eroded the limestone creating vast caves; eventually the water weakened the tops of the cave giving way to the natural sunlight. The cave runs 5.5 miles long, contains a jungle and a river, and can fit a 40 story skyscraper. Public tours commenced this year.

If you’ve ever dreamed of swimming in a massive pool of Pepto-Bismol then book your trip to northwest Africa now. Lake Retba maintains its pink hue from the dunaliella salina algae which produce a red pigment that works with the sunlight to create more energy, turning the waters pink. Locals mine salt from the water, providing a small industry for the area.

Don’t worry, you’re not tripping on psychedelics. These are the Danaxia Landforms in the Ganzu province of China. An ancient basin that dried up over millions of years birthed the oxidized red sediment that makes up the area. Over millions of years orogenic movement lifted the basin, and water flowing down through fissures cut through the landforms creating the unique canyons we see today.

We can infer from these miracles of nature that the Earth itself is perhaps the greatest artist that ever lived. Through the workings of physics and chemistry came the spectacular natural phenomena we see around the world today. Time to get out there and explore, and help restore it’s beauty!