Gov’t Failed to Help, So Dad Builds 5 Mile Road BY HIMSELF, So His Kids Can Go To School 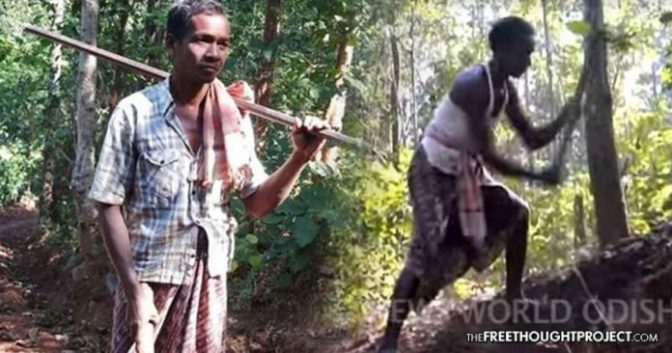 Government told him if he wanted access to town, he’d have to move. So, this incredible man and father built his own road.

A dedicated father in Kandhamal, India has created positive waves around the world for single-handedly constructing a five-mile-long road to connect his village to the main road in the next town—so his sons could be the first people in his family to attend school.

One of the most oft-repeated arguments presented in favor of the necessity of taxation is that of roads.

“But who would build the roads?”

This question has been asked repeatedly by those who defend taxation as a means to facilitate human travel.

All too often, those who make this argument will claim—incorrectly—that government builds roads. However, roads are not built by governments. Roads are built by private citizens who’ve been given a government contract to build them.

Often times, due to the inherently corrupt nature of government contracts and backdoor deals, the citizens are fleeced as they pay high prices for inexperienced companies to build substandard roads that fail in only a few years.

While substandard products from government contracts may seem like a waste of taxpayer dollars, many times, the money taken from citizens in the form of taxation never even builds those promised roads.

Jalandhar Nayak realized this problem years ago, so he took matters into his own hands. As the Times of India reported, Nayak, a vegetable seller, said that he never had access to education and seeing his children suffer in crossing the area forced him to take this step and clear the hillocks to make a pathway.

“My children found it hard to walk on the narrow and stony path while going to their school. I often saw them stumbling against the rocks and decided to carve a road through the mountain so that they can walk more easily,” he told News World Odisha.

Instead of using the tax money they were collecting from Nayak’s village to build a road to connect them to town, the Block Development Office simply told them to move.

“It is almost an inhabitable area where he lives, we had earlier invited him to come and live in the city but he refused,” S K Jena, the Block Development Officer (BDO) said.

Not wanting to abandon his farm and his village, Nayak chose a different path.

Every single day for two straight years this vegetable seller from Odisha state grabbed his tools, consisting of a chisel, a garden hoe, and a pickaxe, and he did what people only think tax dollars can do. He built a road.

Before he built this road, it would take his sons nearly six hours a day just to walk to class and back. Now, however, they can do it in no time, thereby allowing them to contribute more to the family.

Naturally, after Nayak’s story began to gain the attention of local media, the government quickly stepped in and offered up their support.

As the Press Trust of India reported, Nayak’s efforts went largely unnoticed until January 9 when the collector invited him to her office, having read reports about him in a local newspaper.

The collector offered him financial support and directed the block development officer (BDO) of Phulbani to engage laborers and complete the road construction work.

Indeed, Nayak’s effort and determination are a testament to the power of humanity to accomplish great things—even without our masters in the state telling us we can.