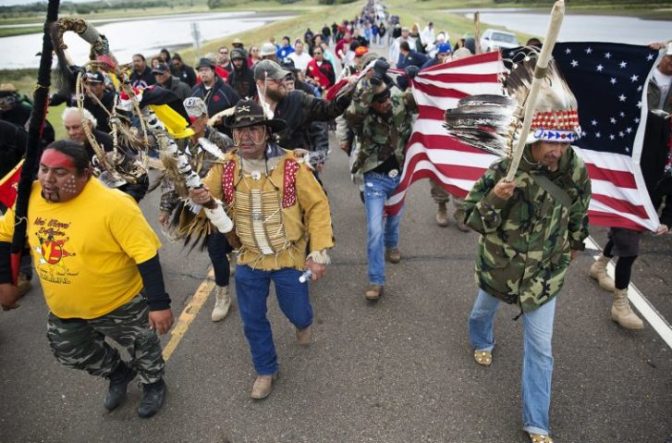 According to demonstration organizers, more than 2,000 U.S. military veterans plan to form a human shield to protect protesters against the North Dakota Access Pipeline, in response to a federal deadline that pressures peaceful activists to evacuate the camp they have been occupying.

Growing exhausted of the protests, North Dakota law enforcement has sought desperate measures to put the event to an end, while those occupying the site are determined to make change no matter how long or hard they have to fight. Law enforcement had previously tried to cut off supplies to the camp, but failed to follow through due to public outcry and a growing awareness of their unethical treatment of the protestors.

Protestors have been rallying for months to stop the $3.8 billion Dakota Access Pipeline from moving forward, as it would disrupt the lake near the Standing Rock Sioux reservation, harming water resources and sacred Native American sites.

Now, former U.S. Marine Michael A. Wood Jr. and  Wesley Clark Jr., a writer whose father is retired U.S. Army General Wesley Clark, have formed Veterans Stand for Standing Rock. They plan to round up thousands of demonstrators at camps located on U.S. Army Corps of Engineers land as a means for protecting organizers.

U.S. Representative Tulsi Gabbard, a Democrat from Hawaii and a Major in the Hawaii Army National Guard, said on Twitter that she, too, will join the protectors who plan to build the human shield this Sunday.

Morton County Sheriff’s Office spokesman Rob Keller responded to the news, saying his agency was aware of the veterans’ plans, though he did not explain how law enforcement officials planned to handle the ordeal.

Water protectors include many Native American tribes, environmentalists, and even celebrities like Shailene Woodley. Woodley has worked to make the protest worthy of more media coverage. “I’m just sick of it. There is no excuse. Where is everyone? Why isn’t everyone standing up and saying something?” she asked while breaking down in tears.

“I figured this was more important than anything else I could be doing,” said Guy Dull Knife, 69, a Vietnam War veteran. Knife is a member of the Oglala Lakota tribe from the Pine Ridge Reservation of South Dakota, and said he has spent months camping at the protest site.

The Army Corps ordered the evacuation of the primary protest camp by December 5, citing safety concerns. However, it was also noted that they wouldn’t forcibly remove people from the land. The state’s decision not to stop cars entering the protest site also indicates that local authorities will not enforce Monday’s evacuation, which has been issued by Governor Jack Dalrymple.

Dalrymple said it was “probably not feasible” to reroute the pipeline; however, he called for a meeting with the Standing Rock Sioux Tribal Council to rebuild a relationship.“We need to begin now to talk about how we are going to return to a peaceful relationship,” he said. He warned that the evacuation depended on weather conditions.

Protectors have been preparing for the harsh winter as they await the Army Corps’ decision on whether or not Energy Transfer Partners will be permitted to tunnel under the river. So far, the decision has been delayed twice by the Army Corps.