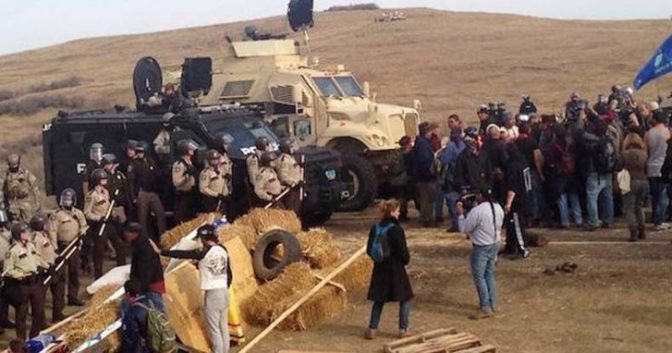 In response to an increasingly furious public outcry, sheriffs from around the country have refused to send personnel and equipment to assist the Morton County Sheriff’s Department in guarding construction of the Dakota Access Pipeline.

A massive campaign of angry phone calls and indignant emails to departments planning to travel to North Dakota succeeded in persuading multiple sheriffs — elected officials — the brutal tactics used against peaceful Standing Rock Sioux and other water protectors have been a gross abuse of power.

That law enforcement have employed disproportionate force against water protectors is irrefutable; and while Morton County Sheriff Kyle Kirchmeier might technically be tasked with ensuring Dakota Access can proceed where legally permitted, he is indisputably responsible for protecting people exercising their First Amendment rights.

Clearly, to the appalled constituents and people around the world voicing outrage against Morton County and other departments, officers have completely dismissed that protection — and, instead, acted as a rogue standing army, intentionally targeting medics, journalists, and water protectors with everything from rubber bullets and tear gas, to icy water and concussion grenades.

Sheriffs concerned about the heinous use of force — not to mention, re-election — have wisely reconsidered requests to join what has, in essence, become a war against Indigenous peoples interested only in preserving uncontaminated water for future generations.

According to Yes! Magazine’s Jenni Monet, those considerations coupled with vocal public objections caused Montana’s Gallatin County Sheriff Brian Gootkin to “literally turn his detail around” — after they departed for North Dakota.

“I got messages from England, Poland, New Zealand, Australia,” Gootkin said, according to Yes! Magazine. “I wanted to go and help my fellow law enforcement. I just don’t understand where we separated from the public. It really breaks my heart. We are not the enemy.”

Monet explains despite the Emergency Management Assistance Compact (EMAC), which mandates law enforcement nationwide to lend assistance during emergencies or disasters, Governor Steve Bullock had concerns the agreement was being misused. A flood of callers and emailers doubted EMAC should apply to the protection of a private Big Oil company’s pipeline, when it seemed more aptly suited for situations like natural disasters and the attacks of September 11, 2001.

On November 14, Gootkin explained his decision not to join the Morton County Sheriff’s Department in acting against the Standing Rock water protectors in a post to social media:

“Yesterday I had made a decision to send Deputies to the protest in North Dakota to help with that volatile situation. I have been in protest situations in my career and fully understand that in many cases law enforcement is placed in the middle of two emotional opposing interests and we have to attempt to balance our role as peace officer and law enforcement. Many of you emailed and called the Office to voice your concerns. As your Sheriff I was very humbled by the honest conversations we had. Although my actions were well intentioned you made it clear that you do not want your Sheriff’s Office involved in this conflict. One of the biggest differences of an elected Sheriff from other law enforcement leaders is that I am directly accountable to the people I serve (YOU) and although I am personally torn knowing that people (Including Montanans) are hurting over there, we will not be responding. Finally I am incredibly grateful that we live in a place where we can have differences and talk about them respectfully as adults without conflict. Thank you.”

Gootkin and the Gallatin County deputies never made it to North Dakota, but other departments briefly assisted the Morton County Sheriff, and then refused to complete planned rotations, pulled out, and never returned.

Wisconsin’s Dane County Sheriff Dave Mahoney and his personnel lasted one week policing water protectors before public excoriation forced him to back out of completing a planned three-week rotating deployment. That group of officers left for good and no further personnel were deployed, as Mahoney told the Bismarck Tribune,

“All share the opinion that our deputies should not be involved in this situation.”

Many of the agencies helping to guard pipeline construction have received been lambasted in a furious backlash, and, according to Monet, “the number of law enforcement agencies assisting Morton County has dwindled — in some instances, because of the pipeline’s polarizing effect.”

Minnesota’s Hennepin County Sheriff Rich Stanek and his deputies were praised for their actions clearing what became known as the “1851 Treaty Camp” on October 27. However, water protectors and independent journalists on the scene contend law enforcement brutalized water protectors, disrespectfully disassembled tipis, and refused to allow anyone to gather their belongings. Some claimed when they returned to the scene much later, officers had carelessly thrown tents, clothing, and other items in a pile, leaving all of it damaged and soaked in what seemed to be ammonia and urine.

“I do not have any control over the Sheriff’s actions, which I think were wrong,” Lt. Governor Tina Smith said in a statement cited by Yes! Magazine. “I believe he should bring his deputies home, if he hasn’t already. I strongly support the rights of all people to peacefully protest, including, tonight, the Standing Rock protest.”

Stanek felt differently and reiterated the nine-day deployment to North Dakota had been “the right thing to do” — but, apparently succumbing to contention, the sheriff said his personnel would not return.

In short, public pressure can be surprisingly effective.

And in that vein, the American Civil Liberties Union compiled the most complete list to date — using information provided officially and that from media reports — of law enforcement departments assisting the Morton County Sheriff and pipeline construction. Some have since returned from those deployments while others may still be present in North Dakota. According to the Morton County Sheriff’s Department at the beginning of November, 24 counties, 16 cities, and nine states have contributed over 1,300 law enforcement personnel and equipment since August 10.

Links to news reports specifically naming departments have been included in the ACLU’s list here.

Considering the success of public outcry in forcing law enforcement to reconsider policing the Standing Rock movement to protect the water, following is the contact information from the websites for the appropriate North Dakota officials and law enforcement departments from all states, as listed by the ACLU.