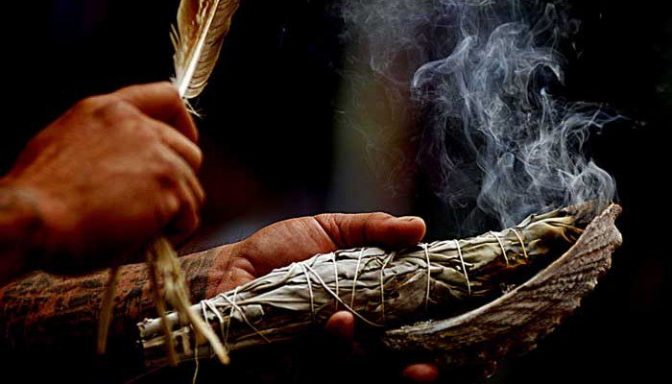 It’s known to indigenous American cultures as smudging, a sacred, long-held practice that entails the burning of herbs and plant resins, the most common being white sage, in a ceremonial type setting. The smoke from the burning plant is said to “unlock the plant’s spirit,” which, when wafted through the air, cleanses the person or designated area of unwanted energies.

Within the last century, though, the traditional Native American practice has been adopted by a broadening Western spiritual class who are reconnecting with our ancestor’s primordial wisdom. Even science has been looking into the incredible antiseptic benefits of smudging.

One study, published in the journal Ethnopharmacology, observed that a 1 hour treatment of medicinal smoke emanated by burning wood and a mixture of odoriferous and medicinal herbs (havan sámagri=material used in oblation to fire all over India) on aerial bacterial population caused an over 94% reduction of bacterial counts by 60 min. Furthermore, the smoke maintained air purity for up to 24h in the closed room.

Another scientific review looked at single and multi-ingredient herbal and non-herbal remedies administered as smoke from 50 countries across 5 continents. They found, with surprising overlap worldwide, medicinal smoke is mostly used to address the following specific organ systems: “pulmonary (23.5%), neurological (21.8%) and dermatological (8.1%).”

They also found that “ambient smoke,” which is the type of passively inhaled smoke generated by smudging/incense, is traditionally believed to be an effective “air purifier.” The review argued that modern medicine should investigate medicinal smoke as a drug delivery system, owing to the following advantages: “The advantages of smoke-based remedies are rapid delivery to the brain, more efficient absorption by the body and lower costs of production.”

Indoor Air Quality Is Worse Than You Might Think

Many are unaware just how many air contaminants are floating about their households at all times.

While air quality is an often overlooked health concern, what many do not realize is just how many nasty particles we are consuming on the daily. According to a study by the California EPA, you breathe anywhere between 10,000 and 70,000 liters of air every 24 hours. A 2009 study of homes near the Mexico/Arizona border found indoor air quality to be worse than previously thought, identifying 586 chemicals, including the pesticides diazinon, chlorpyrifos and DDT, phthalates in high levels, and even 120 chemicals they couldn’t recognize.

When we take into consideration all of the chemicals sprayed on our furniture and appliances, the fumes from carpet, paint, and cleaning products, cigarette smoke, cooking particles, dust, mould, and fungal spores, we can see how quickly our indoor air quality can become compromised.

All of this data leads to another question – could all of these common indoor particulates be leading to widespread health issues like headaches, respiratory problems, asthma, allergies, fatigue, and more?

While more research is still needed, the bactericidal benefits of smudging seem quite promising, especially if such a simple practice has the potential for reducing some of today’s most common and inconvenient health issues.