Message for POPE FRANCIS: If you believe in EQUALITY, revoke the PAPAL BULLS 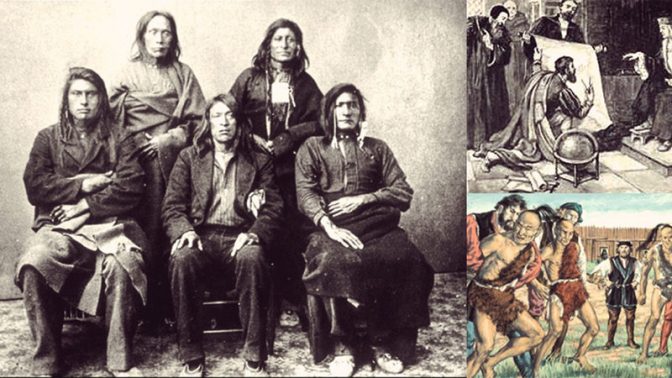 At the 1904 World’s Fair held in St Louis, Missouri, two thousand “primitive peoples” were put on display to demonstrate the superiority of the white Americans who had “evolved” further. Not long earlier, the Berlin Zoo had also put a family of Labrador Inuit “on display”. Similar events took place at the Bronx Zoo, in Stuttgart and elsewhere at the turn of the 20th century.

How could a 20th century World’s Fair whose purpose is to celebrate the progress of humanity, display “primitive peoples” as a lower form of humanity? How could a group of human beings display fellow human beings in a zoo, because they are “less evolved”?

The answer to this question lies in three 15th century Vatican orders called “Papal Bulls” that authorized Christian Kings to “invade, search out, capture, vanquish and subdue” the lands of indigenous peoples and to “reduce their persons to perpetual slavery”.

The Vatican of that time promoted a belief that non-Christians or heathen were “homo animales”, a baser, fallen form of human, who could either repent, or suffer any form of indignity and cruelty in the name of Christianity. These Papal Bulls – based upon two orders of humanity, one predestined to rule over the other – became the “blueprint” for the Age of Conquest and Discovery, causing suffering, death and displacement of countless millions of indigenous peoples, who still suffer the effects today.

If we look honestly at the crimes committed against indigenous peoples – from the African slave trade to the forced displacement of the Cheyenne under the US Indian Removal Act, the genocidal crimes inspired by the requerimiento, the disproportionate sterilization of Canadian First Nations women and the policy of “Killing the Indian in the Child” in Catholic residential schools in the 20th century, the court rulings that native peoples are “mere occupants”, the suffering of the great Australian Aboriginals and the brave Maori peoples –  we can detect the mark of this “manufactured inequality” that treats people differently, merely because they worship at another altar.

Please show your support by asking Pope Francis to revoke the Papal Bulls of Discovery.

POPE FRANCIS, we are ALL HUMAN BEINGS. Please revoke the PAPAL BULLS