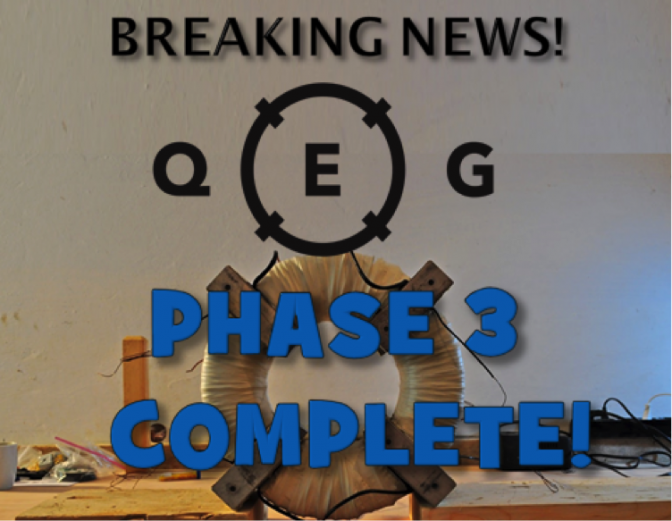 The long awaited QEG Phase 3 Completion was announced yesterday by Hope Girl of the Fix the World Organization. In her public statement on YouTube Hope states: “We are happy to announce, that we have cleared the last major hurdle to making the QEG self-sustain while providing additional power. After months of intensive work, under very difficult conditions, we have just now open sourced the final piece of information that QEG builders around the world will need to finish the machine.”

The last document of information for the QEG can be found on the Fix the World and Be-do.com website under title: “QEG Tuning & Technical Update Parts 1,2 and 3, and QEG Theory of Operation”
This is to be used in conjunction with the third edition manual that was released earlier in June.

This information is a step-by step detailed procedure for tuning the machine to enable the QEG to self-sustain with additional power output. There are as many as 70 (or more) QEG teams that are located around the world, and many more that wish to build that have been waiting for this final piece of information. QEG teams that are building were given this document last week prior to the public announcement to give them an opportunity to get started on the completion of their devices.

“The innovations that can be applied to this prototype going forward are numerous” explains Hope. “In staying with the true co-development nature of this endeavor, we are leaving these further innovations up to the creative expression of the engineers and inventors that are working on the QEG.”

The QEG project started in September of 2013 with the first crowdfunding campaign to build the initial QEG prototype, which is a “Free Energy” device based on a Public Domain design of Nikola Tesla. The QEG is scaled large enough to power an average sized home.

The plans for building the prototype were open-sourced on March 25th of 2014 which quickly went viral, and the QEG family traveled to build five different QEG’s in four countries in the later part of 2014. However, further development was needed to complete the project, and over the last year and a half, the QEG family has worked tirelessly in order to produce this final piece.

The Phase 3 Completion Documents along with the Third Edition Manual is open sourced and given freely given as a gift to the world. The project was made possible through the crowdfunding contributions of 1,212 people over the course of the last two years.

“We have also done tremendous work to set up the proper infrastructure for automated additional learning and distribution through our QEG eBook and a 10 week online video course,” Hope explains. “In addition, we have been raising funds to get all of this material translated into 10 different languages.” (That campaign can be seen at https://www.gofundme.com/qegrosettastone)

”To the best of our ability, and with great personal difficulty of our own, we have been able to deliver that which we set out to do. With this final piece we are now closing the PUBLIC PROJECT aspect of the QEG. As far as the FTW/QEG family team is concerned, any further innovations for the QEG and its development will be conducted in a privatized manner.”

The Fix the World Organization is now working on a revised business plan and seeking philanthropic benefactors to raise capital needs for a proper lab to further the development of the QEG and its numerous applications, and other technology devices meant to help people in need. The plan is to implement global projects from their headquarters in Morocco.

“We have been applying a wide variety of entrepreneurial strategies in order to provide valuable products to people in order to raise the funds necessary for our greater purpose of a full-on humanitarian projects organization. We want to be ready for the financial shifts that are occurring in our world, so that we can present a detailed plan of implementation to any of the humanitarian projects funding that we’ve been hearing about through various channels.”

“I can tell you that the last 2 years have been a real challenge for us and we have faced many great pains, losses and betrayals.” Explains Hope, “One thing I am forever grateful for is the obvious protection our family has received. For the people who believed in us, supported us, and were unwavering in their faith and dedication to this breakthrough: TODAY IS YOUR DAY. I give thanks to God that we have made it through, and that we still have each other and our integrity. Many people have died doing what we have done, and we are all still alive.”

To learn more about the QEG, please visit the following links: