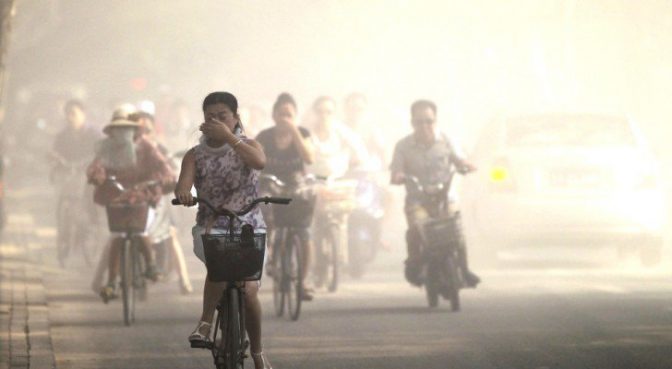 In a country so heavily polluted that some of its regions literally resemble nuclear winters, China is finally making major strides forward in reducing CO2 emissions.

In just four months, China (with a population of 1.34 billion) reduced CO2 levels to the same amount the UK (population of 63 million) usually emits in the same period. Experts have been warning China for years of an impending eco-catastrophe.

The progress comes on the heels of Chinese promises to shut down the last remaining coal plant in Beijing in 2016 and cut reliance by 160 million tons in a matter of just five years. Very worrying statistics have been coming out of the country regarding the impact this pollution is having on the biosphere and on human health – people living in or near China’s industrial regions are at particular risk.

An analysis of China’s energy production, carried out by Greenpeace and Energydesk China, reveals a drop of eight percent in coal consumption and a reduction in CO2 emissions by five percent in as little as four months since the start of this year. This is a drastic change in coal consumption over last year.

This new level of CO2 emissions can most likely be attributed to the closing of more than 1,000 coal plants, despite having previously lead the world in coal consumption and greenhouse gas emissions.

With the UN Paris summit on climate change coming up in just six months, China’s newest achievement seems to have come at the perfect time, reports RT. Many are hoping that a global consensus on climate change policy can be reached at this gathering.

But historically, China has been very resistant to suggestions from the outside world, due to a huge reliance on outdated methods of energy generation. This appears to be changing, with President Xi Jinping and Indian Prime Minister Nadendra Modi publicly calling out for developing countries to commit to cutting carbon emissions and offering a pledge to help others do so.

The two nations have just signed a whopping $22 billion in deals.