After Years of Decline, Finally Some Good News About America’s Honey Bees 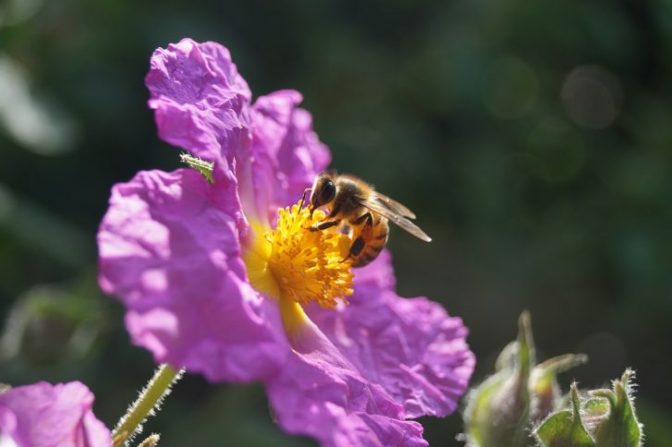 (ANTIMEDIA) — Because 90 percent of modern crops rely on pollination, honey bees are vitally important to ecosystems. Due to mites, pesticides, and a slew of other harms, however, the numbers of colonies in the U.S. and Europe have declined a staggering 90 percent over the past two decades. Fortunately, it appears populations of the bumbling insects in both countries are on the rise.

According to a new honeybee health survey conducted by the U.S. Department of Agriculture (USDA), released Tuesday, honey bee colonies for operations with five or more colonies have risen 3 percent to 2.89 million as of April 1, 2017, compared to a year earlier. Bloomberg reports that the number of operations (with more than five hives) affected by Colony Collapse Disorder — a phenomenon through which thousands of honey bees have disappeared — also decreased 27 percent. Operations with five or more colonies that participated had to meet the following criteria to be considered lost to colony collapse: 1) Little to no build-up of dead bees in the hive or near its entrance 2) A rapid loss of adult honey bee populations even if a queen, capped brood, and food reserves are present 3) An absence or delayed “robbing of the food reserves” and 4) Loss not attributed to the varroa parasite.

While the news of fewer incidents of colony collapse is positive, it cannot be overlooked that honey bee populations for operations with less than five colonies in the U.S. did decrease by 20 percent between January 1, 2015, and January 1, 2016. Additionally, at least two-fifths of beekeepers consulted said mites are still harming their hives. Honeybee caretakers said 13 percent of their colonies were stressed by pesticides, 12 percent by mites, and only 4.3 percent by diseases. Other concerns included bad weather, starvation, and insufficient food foraging.

The study revealed that the overall increase is largely the result of beekeepers constantly replenishing their losses. Tim May, a beekeeper in Harvard, Illinois, and the vice-president of the American Beekeeping Federation, based in Atlanta, affirmed this when he stated:

“You create new hives by breaking up your stronger hives, which just makes them weak. We check for mites, we keep our bees well-fed, we communicate with farmers so they don’t spray pesticides when our hives are vulnerable. I don’t know what else we can do.”

According to the study, beekeepers who own a minimum of five colonies or hives reported that most hives were affected by the varroa mite, a parasite found only in beehives that thrives by sucking insect blood. However, even the mites’ presence has been decreasing, down from 53 percent between April and June of last year to 42 percent in 2017.

One culprit suspected to be a major contributor to Colony Collapse Disorder is a class of pesticides called neonicotinoids (neonics). Though Big Ag companies such as Bayer and Syngenta deny any link between the chemicals in their pesticides and the honeybee die-off, a study published in Science last month linked neonics with poor reproduction and shorter lifespans in European and Canadian honey bees. The research was funded in part by Bayer CropScience and Syngenta AG, the producers of clothianidin, thiamethoxam and imidacloprid. An additional study published by the Harvard School of Public Health (HSPH) in 2014 revealed that the class of insecticides significantly harms honey bee colonies over the duration of winter.

While more research needs to be conducted to discern the true cause(s) of Colony Collapse Disorder, it is fortunate at the very least that populations of the honey bee seem to be on the rise.

Editor’s Note: This article previously stated hives were lost to mites but has been updated to reflect that hives have been affected by mites and other stressors. From Joshua T. O’Rear, an agricultural statistician with the USDA, NASS, which published the report: “We don’t know whether or not varroa mites caused the loss, as we only query respondents to tell us how many of their colonies are affected.”