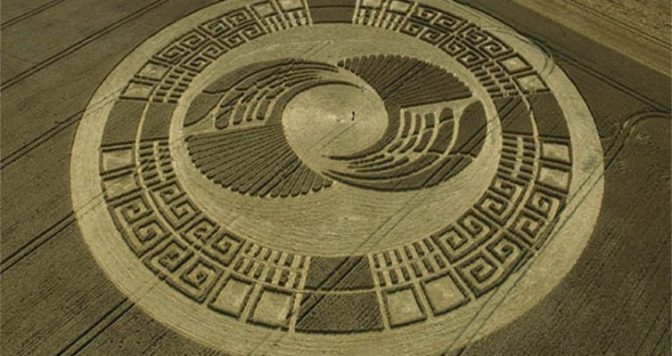 Crop Circle’s are one of the most interesting phenomena I have researched on my path as a truth seeker,

incorporating a diverse range of natural sciences to produce the final product. I do not know exactly why they occur, but there are several data points that suggest a holistic system is at work. The same type of holistic systems that produce the emergence of life on a habitable world.

Crop circles appear in certain places at a very consistent rates, especially over limestone deposits, or calcium carbonate. Ley Lines and Electromagnetic fields also have a correlation to their appearance. Finally there are the life enhancing effects of the circle themselves, wherein crops that have been so affected have better yields, seeds are more productive and the coherence of electromagnetic fields around the circle is increased, all of which benefit the vitality of living systems. I am hardly an expert on the topic, but have reviewed data at various points and remember some facets of them.

We recently posted a Dan Winter talk, Science Of Ascension, Evolution and much more | Fractality: What Makes a LIVE ENZYME – Alive? with Dan Winter, which I suspect provides a scientific backdrop for understanding all effects observed, especially the life enhancing effects previously mentioned.


Then of course there is the intelligence aspect. These circles are not just ‘pretty shapes’, they have a discrete and highly organized pattern to them which suggest they represent an idea. Symbols are used by intelligent orders of life to communicate ideas, and if one analyzes the shapes within crop circle phenomenon there are far too many correlating relationships for it to be random coincidence.

One of the most well documented examples of this is the famous Answer to Carl Sagan’s Arecibo Message in a Crop Circle Response Glyph: What is there ultimate meaning? What message is being communicated via these shapes? And how can this benefit humanity and it’s evolution?  I can only guess, but if the truth is one, if all things serve the creator and the spiritual involution and evolution of the universe, I have no doubt that there is a profound meaning waiting to be discovered; one of the more mind expanding mysteries on Earth.
– Justin

Delve into the Crop Circle phenomenon with a film maker who has visited more than 100 Crop Circles personally. After having an out-of-body-experience in the center of an English Crop Circle (2007) Patty Greer produced 5 full feature UFO documentaries in record time. With no previous training or experience in film making whatsoever, she zoned in on the UK Crop Circles and the ‘Balls of Light’ seen in and around them. Greer takes the study into a new realm of possibilities, sharing daunting footage and clips from her documentaries as potential evidence that (ET) Balls of Light may be involved in the creation of (many) Crop Circles!