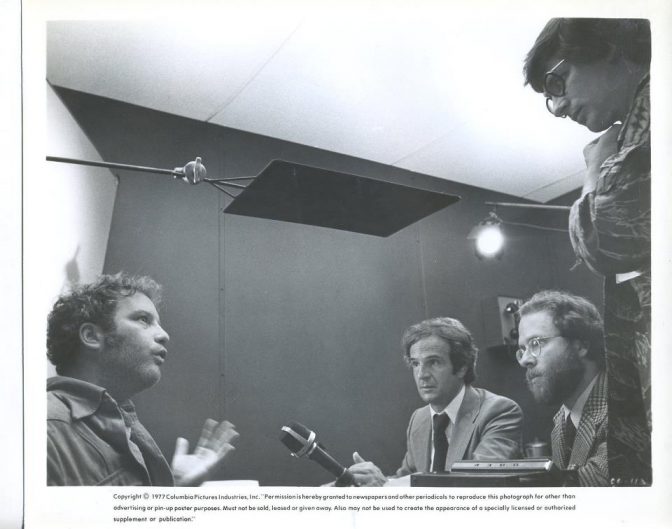 I’d like to take a moment and briefly explore a topic that I’ve been drawn to throughout my life. Somehow I feel a very strong connection to what we call E.T.s (extra-terrestrials) or beings who exist beyond our world. I cannot explain why and I’ve been seeking out the reason and questioning this fact my entire life. Growing up as a child of the 70’s and early 80’s I’ll go back to my past and relive and explore this topic through the eyes of a child (me). As a kid being heavily influenced by some powerful films that in my opinion were produced for the specific purpose to help awaken humanity, I will touch upon the role some of these films had that began my questioning and inspired and changed my life forever.

Close Encounters of the Third Kind

Take a long hard look at this photo.  Richard Dreyfuss’ character Roy Neary is me.  And this scene pretty much sums up my life.  After experiencing a close encounter, Roy Neary had a profound “inner knowing” of something he needed to do and was demanding answers from these people.  This drive brought him to the brink of obsession and insanity.  His wife left him and he ventured out and found the Devils Tower in Wyoming, which eventually led to having all his questions answered. The difference between Roy Neary and I is that I do not yet have those answers.  And it can at some times become maddening.

What makes most of us awakened hearts around the globe have such a strong connection to the Galactics?  This is more than just a simple quest for truth of “do they exist?”  Is there something programmed in our DNA? Did we live a past life on another planet and have subconscious memories of long lost friends and relatives? Or are there subliminal messages we are receiving through today’s media?

It’s a very deep question and finding the answers could reveal the secrets of humanity and about why we are here where we came from.  Why have I spent years looking for life beyond our planet and obsessing about finding the answers? I’m sure like many around the world it began as a mission to find out if there is life on other worlds.  This evolved into questioning who are these beings and are they friendly. What purpose do they serve and what is the connection to humanity?

FACT:  Galactics do exist and are here and around the planet and have been since the very beginning of our world.

Ok so now that we’ve gotten past this news flash I am looking for answers on the strong connection I have to these beings.  I’ll begin by going back to the late 1970’s after watching certain movies not only captured my imagination, but also woke something up deep down inside.  Almost like a feeling of déjà vu.  Silly as it sounds it’s true.  The people who created these films were on to something.  Could these have been inspired by a memory of a past life experience?  Or is it possible these were simply downloaded into their consciousness by the Galactics?

Just 3 days before graduating from high school George Lucas was involved in a near fatal car crash. For three days he hung between life and death and was hospitalized for two more weeks.  Did George Lucas have a near-death experience?  I believe many people have and simply were not allowed to remember the experience.  In any case this experience changed his life forever.  Was Star Wars a Lucas creation from an actual recollection of a real past life experience that took place a long time ago in a galaxy far far away?

As a young boy seeing Star Wars was more than your typical moving going experience.  Is it possible Lucas created this film to wake up humanity to the fact there are creatures all over this vast universe?  The creatures, technology, spiritual and geopolitical worlds, and abilities such as telekinesis he developed for the film go well beyond anyone’s imagination at the time.  Looking at all the creatures in the cantina scene was simply eye opening.

This film triggered something inside so my quest began to find the deep connection to beings from other worlds.  Maybe Lucas dies and was sent back to his life for this very purpose.  To help those around the globe begin to awaken and seek out this knowledge.

E.T. the extra-terrestrial and the Benevolent Presence

Is it just coincidence that some of the highest grossing films in our time are not movies about aliens blowing up the planet and destroying the earth?  No the fact of the matter is that movies such as E.T. and Close Encounters offered movie goers a different experience.  These films brought forth the notion of a benevolent presence of these beings.  Could it be that people around the world came out in droves because this presents a more truthful version of E.T.?  That for humanity subconsciously we have an inner knowing of past lives and experiences in a benevolent Galactic society?

I do believe that similar to earth there is good and bad throughout the universe.  So not all Galactics are benevolent.  Hollywood however is determined to instill fear into humanity by constantly making films about evil aliens that want us all dead.  That’s a whole other topic in itself for another day.

Although E.T. was a movie made for the family and including children, it did show us how the government’s “men in black” had no respect for the life of this creature and how they are in the “cover up” business.

I enjoyed this interaction between the boy Elliot and his E.T. friend and began again to question why I wanted to have a similar experience.  E.T. was friend not foe.  And a connection between the two and their senses was made when we saw them both experiencing the same feelings.  E.T. drank beer and Elliot sitting at his desk in school at the time also became intoxicated.  When E.T. got very sick so did Elliot.  And it may not be these same connections in the physical sense, but it still shows how we may very well indeed have a connection to civilizations outside our world.

Star Trek presented us with the idea that in the future humanity will explore the universe as our advancements in technology take us to the stars.  One thing I love about these films is the moneyless societies and also their laws.

I believe Gene Roddenberry is absolutely brilliant with his creation.  His vision for the future is simply captivating.  It shows humanity reaching out to Galactic beings throughout the universe and providing a glimpse of how humanity will finds its place in a Galactic Society.

Star Trek opens up and defines a whole new realm of what it means to be an explorer as a human being. Humanity has traveled throughout the globe and explored the wonders and beauty of this planet since the beginning. That same passion and curiosity will no doubt take us beyond our world as it has already done starting back in the 1960’s and we will explore not just other planets, but other life forms throughout the entire universe. No doubt as a child I couldn’t help but be captivated by this vision of Gene Roddenberry.  And he was definitely a man way ahead of his time.

This is something that I felt I may have already experienced.  It’s indeed very strange that watching these films trigger certain emotions and feelings of knowing this is somewhat reality for how these societies are structured.  And again this brings me back to wanting to know why there is this connection and seeking out answers.

So what’s the Connection?

There are so many good ways and paths to venture down if you are looking for answers.  As I previously stated Dreyfuss’ character Roy Neary got his answer in a big way.  A massive ship landed in Wyoming and took him onboard ship and up to the stars.  Will we have to wait for an event like this to find out why millions around the world have been obsessing for the truth about our Galactic connection?

Robert Dean said he believes the fate of humanity is out in the stars.  That’s where we belong and that’s where we are going.  Just as we see in Gene Roddenbery’s vision of the future in Star Trek.

After doing multitudes of research, spending countless hours reading books and blogs, watching documentaries and movies, and listening to radio shows, I’m still not certain what our connection is with these beings from other worlds. I can say that although I may never find the answer, I will never stop searching.  It’s in my blood.  It’s in my DNA and genetic makeup.  It’s embedded in my subconscious that my mission here on this planet is to assist in waking up humanity to the truth that we are not alone in the universe.  And I will forever continue to play my role in help spreading this awareness.

One thing I do know for an absolute certainty and that is if I never find the answers to the E.T. connection in my lifetime, I most certainly will after leaving this incarnation.  Hopefully I can find the answers long before then and help reveal to the world who these Galactic beings are, why they are here and what roles they will play in assisting humanity in the future.