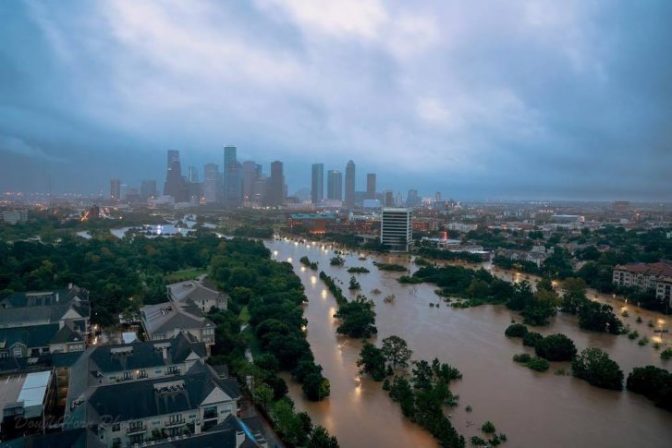 (ANTIMEDIA) — After evolving into a Category 4 storm from a tropical depression in only 56 hours, Hurricane Harvey made landfall Friday night near Rockford, Texas, where it stalled for hours, unleashing sustained winds of over 140 mph, along with torrential rain. As the storm inched onto land, it slowly reduced in intensity, but with the decrease in wind speed came an increase in rainfall.

Overnight Saturday into Sunday morning, the worst case scenario rainfall projections suddenly appeared to be coming true. Houston and the surrounding areas were taking on water at a rate of six inches an hour. Catastrophic rainfall amounts are estimated to end up as high as 50 inches in some areas.

As night fell, Houston’s roadways began rapidly taking on water, stranding drivers in their cars and residents in their homes. Around midnight, the National Weather Service and local Houston authorities urged residents to stay in their homes and avoid all travel, referring to the flooding potential as both “epic” and “catastrophic.”

Rescue teams were overwhelmed with too many emergency calls to respond to each one and had to prioritize life-and-death situations.

More than 1,000 water rescues had already completed in Houston as of this morning in what is expected to be a multi-day emergency for much of the region.

Houston residents stranded in their flooded homes have been using social media to plea for rescue assistance as emergency responders are inundated with calls, leaving many of the stranded unable to contact authorities.

As the waters continue to rise, Texans brace themselves for what might be one of the worst natural disasters to hit the U.S. in decades. The Houston area can expect an additional 18 to 24 inches over through Friday.

Here are a number of photos and videos showing the beginning stages of flooding already wreaking havoc on the citizens of Houston: