US Just Agreed to $250 Billion in Trade Deals With China: What You Need to Know 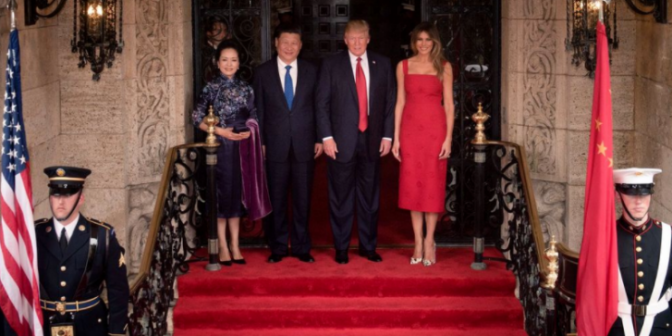 (ANTIMEDIA) Beijing — Last night, reports started rolling in that Donald Trump snagged over $250 billion in trade deals with Chinese enterprises. On the surface, it sounds like a score. To Trump supporters, who will see nothing but a big fat number to add to the “win” column of the man who promised to reduce the U.S. trade deficit with China, that’s certainly how it will be viewed.

It all looks rosy at first glance. Donald Trump gets to walk away looking like he’s making good on campaign promises, and Xi gets to demonstrate that he’s willing to work with both Trump and U.S. companies — many of whom have long had a gripe about access to Chinese markets.

Incidentally, the biggest deal involved the state-run China Energy Investment Corporation agreeing to invest $84 billion in shale and chemical projects in the state of West Virginia. Another big one is a $43 billion deal between China Petrochemical Corporation, another state-run enterprise, and the state of Alaska to jointly explore liquified natural gas projects.

Other deals are in areas of finance, agriculture, telecommunications, and aviation — state-run China Aviation Supplies Holding Company agreed to purchase 300 planes from Boeing in an order worth $37 billion. It all adds up to that lovely-sounding $250 billion figure.

The problem, however, is that the deals are non-binding in nature and held together mostly by pledges and initial agreements.

“I am somewhat skeptical of such a large number,” Alex Wolf, senior emerging markets economist at Aberdeen Standard Investments, told Reuters. “I suspect they might be primarily MOUs (memorandum of understandings) instead of actual contracts and the actual contract amount may be substantially less.”

In fact, it appeared to some that Trump was pulling a classic political move to try to make himself look good.

“To me this is an old-style visit when you pile up all the deals so you can to get a big number,” James McGregor, China chairman of the consultancy APCO Worldwide, told Bloomberg. “This is all for show for President Trump to demonstrate his deal-making prowess.”

Hugo Brennan, Asia analyst at risk consultancy Verisk Maplecroft, agreed with McGregor. But he also noted that the deals conspicuously leave out details about what concerns U.S. businesses the most — access to Chinese markets.

“[These deals] allow Trump to portray himself as a master dealmaker,” Brennan told Reuters, “while distracting from a lack of progress on structural reforms to the bilateral trade relationship.”

For his part, President Xi did pledge to ease regulations that make it difficult for U.S. companies to do business in China. But Xi also said these changes will happen on China’s own “timetable and roadmap,” meaning Trump will likely have a hard time getting Xi to budge on policy in the immediate future.

Brennan also noted that the non-binding nature of the deals, while “politically expedient” for both sides, would give Chinese firms “the flexibility to quietly back away from the deal down the line.”

“It’s their technique to try to suck you in,” he said. “I think all this ceremony here is designed by the Chinese in part to prevent any serious conversation. The more there is pomp and circumstance, the less there is time to talk.”

There’s been plenty of that of late. As Anti-Media reported Wednesday, Donald Trump and his wife Melania got the red carpet treatment — literally — when they touched down in Beijing this week. The couple was then treated to a relaxing day of opera and sight-seeing before the two world leaders got down to business.

Don’t forget, also, that this warm reception by Xi only happened after weeks of Trump heaping praise on the Chinese president, culminating in statements like this one, made hours before the $250 billion “megadeal” was announced:

“I don’t blame China,” Trump said at a business event in Beijing — one Xi also attended. “After all, who can blame a country for being able to take advantage of another country for the benefit of its citizens? I give China great credit.”

If that sounds like a total position reversal from the man who consistently trashed China on the campaign trail, it is. But perhaps this is what Trump realized he needed to do to get the “win” he promised his constituents. Remember, China always had the upper hand here. After all, it’s the U.S. that has the estimated $347 billion trade deficit with China, not the other way around.