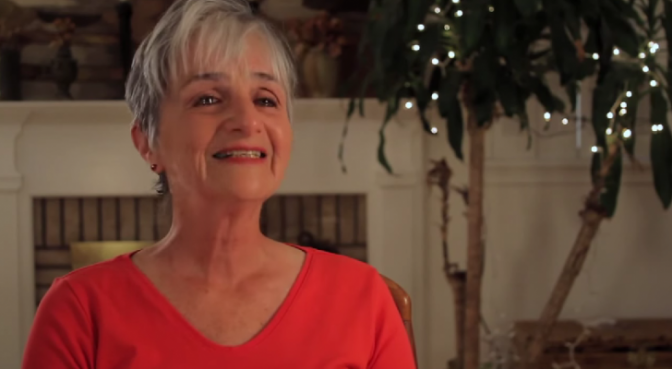 When 65 year-old psychotherapist Estalyn Walcoff was diagnosed with a type of untreatable lymphoma 5 years ago, she could barely handle the news.

She explains (seen in the video below), that the prognosis only perpetuated her already present anxiety, something she’d faced throughout her life.

But Estalyn was determined to stay positive, repeating positive affirmations such as “even though no one else has made it, it’s possible that I can.“

Another shift came with Estalyn’s new-found desire to look inwards, to discover who she really was. She knew she didn’t want a bitter heart, and she became curious if incorporating a spiritual outlook into her life would help prevent this attitude from ever manifesting.

It was soon after that Estalyn came across a study looking for new test patients. The study involved the consumption of psilocybin, the active ingredient in ‘magic mushrooms’, with hopes in treating anxiety and depression in cancer patients.

“I read about it online, and I read it once and then I closed it. Then I read it again, and said “I qualify for that!’, so I traveled down to New York City for an initial screening interview,  I traveled [there] several times for psychotherapy sessions with my two psychiatrists, Jeffrey Guss and Seema Desai. They were with me during the dosing, and for subsequent psychotherapy sessions.”

The sessions took place at NYU, where Estalyn explains the researchers did an excellent job at creating a comfortable environment for her to take the mushrooms in.

“There was a couch, flowers, and books, and it seemed not-study-like” she remarked with a smile.

Guss and Desai were determined to provide a serene setting for Estalyn to experience in, she explains, even taking the time to set an intention circle before her dose.

“Jeff and Seema had a wonderful ritual with the three of us, intending for how that day would go, which I thought was lovely. I also asked if I could read a poem, and play a song that really moved me, to set an intention for the day too.”

She was encouraged to wear eye shades, to help induce an inward journey. This was new to Estalyn, considering the few times she had tried magic mushrooms in her 20’s was all about the external, 5-sense experience. This time, however, she would be journeying through the dark barrels of her own mind.

A Surprising Start To Her Trip

Estalyn told researchers her expectation going into the experience was that somehow she would “see god,” that she would “touch a level of spirituality,” and that her “life would be changed.”

But what happened first, and what lasted much of the day, was surprising to Estalyn, she experienced great anxiety. This anxiety came in physical form, she said, and she soon realized that this anxiety was actually a level of her own mind. She began to feel immense pain, the likes of which she felt was directly related to the pain of the collective, including the Earth itself.

“I began feeling that I was actually holding the pain of the world in some way. I had been listening to black spiritual, and I felt the pain in the woman’s voice who was singing the song. I felt the whole gestalt of slavery, and what it is like to pull people out of their homes and take them here to this country and treat them like animals, and I sobbed and sobbed because of that.“

By experiencing the pain of our people’s history, Estalyn was able to release buried emotions, something she said gave her great relief.

“The worst pain, and the worst fear, and the worst anxiety turned into something that has opened [me up], which is the most precious thing I’ve ever known. To think I would’ve never known it, oh my gosh, I can’t think about not knowing it. I wish I could put it into words, it was a sense of connectedness that runs through all of us.”

The Biggest Insight She Gained From The Experience

Estalyn was told by a facilitator that the lessons she had learned that day would take root in her heart, and that she’d grow to know them in that way, which is exactly what happened, she told the interviewer. The fear, as it was released, transformed itself into an open heart which was then able to receive these lessons.

Estalyn explains, with tears falling from her eyes, that during a recent meditation she felt enormous compassion for herself.

“That touches me the most, that is such a gift.”

Showing compassion to others was never a difficult task, Estalyn explains, because she had a grandmother who taught her to live full of compassion with others. But the one person Estalyn was never able to show compassion for was herself. She revealed that she held herself to a high standard, judging herself critically and constantly. But to have a moment where she felt for the first time she was ‘okay’, was invaluable.

She reveals that someone recently called her to ask how she was doing, to which she replied “wonderful!”, something she had never said in her entire 65 years.

“With the people I’m closest to, I’m having much more fun. My husband and I are laughing more, we danced in the kitchen in the morning the other day, just wonderful things.”

What Is The Future of Psychedelic Assisted Therapy?

Estalyn strongly believes that psychedelic assisted therapy would help so many of her clients, and she’s not alone.

In recent years, psychedelic research has been reignited after decades of lying dormant due to government suppression. There is now a reemergence of interest in the therapeutic and medicinal benefits of various entheogens and plant medicines, including psilocybin, MDMA, ayahuasca, ibogaine, cannabis and more.

The great enthnobotanist Dennis Mckenna has his own theory about this reemergence. He proposes that plant medicines are mother nature’s way of communicating with mankind, and that she is making a last-ditch-effort to save the planet by reconnecting humanity with nature.

Throughout history, mankind has distanced itself from nature, exploiting the planet for its limited resources. Today we see the rapid destruction of lifeforms and ecosystems worldwide, we are even mercilessly killing each other, all in the name of power and financial gain. These unsustainable behaviours can only continue for so long, until the mistakes we’ve made can no longer be undone.

How will psychedelics play a role in reconnecting mankind to both nature and each other? Will humanity wake-up to its collective insanity in time to save the planet? The answers to these questions we don’t yet know, but I choose to believe in a hopeful future for all living beings on Earth.

Remember that big changes always start with the individual.