Inflatable Greenhouse From NASA Could Feed Astronauts on Mars 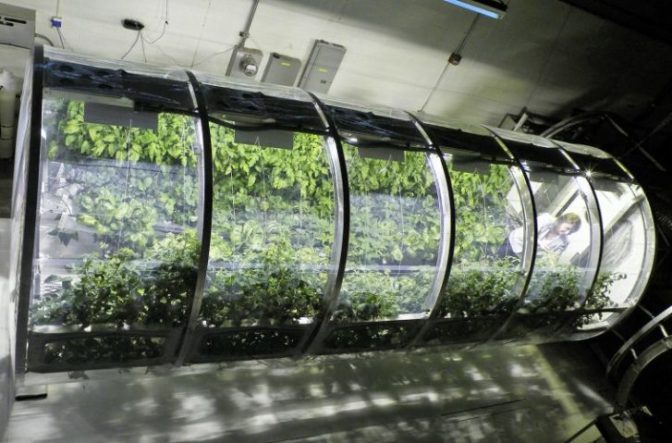 When you think of a greenhouse, one thing that may come to mind is how the innovation extends the growing season for foods. But for NASA, a greenhouse could represent the difference between there being life on Mars — or not.

Images of a greenhouse may conjure up images of sheds all the way to industrialized buildings. But an inflatable cylindrical greenhouse? Not so much.

A group of researchers from the University of Arizona, in collaboration with NASA scientists, have created the inflatable greenhouse to help feed astronauts on other planets. Called the Prototype Lunar/Mars Greenhouse project, it would grant astronauts taking part in extensive space missions access to fresh, healthy food year-round.

With life on Mars more tangible than ever before, scientists are beginning to create solutions to the what-ifs holding the mission back. Of those concerns is how spacefarers can take years’ or lifetime’s worth of food with them. The simple answer is, they cannot, nor can any plant grow in native Martian conditions. To solve the problem of how to send humans to live on the moon or Mars with food, the inflatable greenhouse project was born.

“We’re mimicking what the plants would have if they were on Earth and make use of these processes for life support,” explained Dr. Gene Giacomelli, director of the Controlled Environment Agriculture Center at the University of Arizona. “The entire system of the lunar greenhouse does represent, in a small way, the biological systems that are here on Earth.”

Giacomelli, a professor in the University of Arizona’s Agricultural and Biosystems Engineering Department, says the next important move is to test additional lunar greenhouse units to make sure the system being developed will properly feed the crew of astronauts working on the moon or Mars.

“We will develop computer models to simulate what we’re doing to automatically control the environment and provide a constant level of oxygen,” he said.

The system will work by using the carbon dioxide astronauts exhale for the greenhouse, while the oxygen the plants produce will release into the human settlement. The system will pump oxygenated water with the necessary nutrients across the plants’ root zone, then collecting and storing what’s left at the end. The hope is to bring water from Earth, but eventually water sources on Mars will have to be found and stabilized for human use.

Though plants on Earth grow under the sun, the greenhouse in space will require different resources. The current prototypes are cylindrical, measuring 18 feet long and more than 8 feet in diameter, and were built by Sadler Machine Company, one of the project partners.

The greenhouse units will have to be protected from radiation in space, and so the thought is the system will be buried under the surface soil or regolith, and will therefore require specialized lighting.

The team hopes to create greenhouses in various sizes for different plants, keeping in mind what the astronauts want to bring.