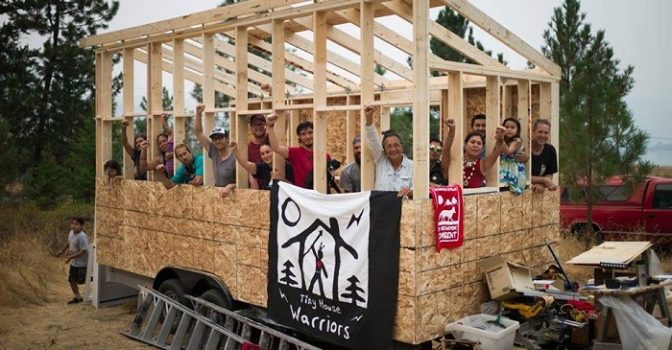 (ANTIMEDIA) British Columbia, Canada — On Thursday members of the Secwepemc Nation in British Columbia built the first of ten tiny homes on the path of Kinder Morgan’s Trans Mountain Expansion pipeline. The Secwepemc are partnering with environmental activists and other allies to fight against the controversial pipeline, which will cross 1,309 bodies of water, including the North and South Thompson Rivers on First Nations land. The Secwepemc have never given their consent for Kinder Morgan to cross their lands or waters. In response to Kinder Morgan ignoring their protests, the Secwepemc “Tiny House Warriors” organized to build tiny houses for members of their community.

“The house is a symbol of the community’s opposition to the pipeline and is based on a design from allies at Standing Rock. The tiny house will be 18 feet by 7 feet by 12 feet, and will feature a hand-painted mural,” a statement reads.

“We are building this tiny house and placing it in the path of the Kinder Morgan pipeline to show in no uncertain terms that this land is our home. As Kinder Morgan tries to force through a pipeline without our consent — risking polluting the land and poisoning our rivers — we are rising up to create a resistance rooted in family, community and hope,” said Kanahus Manuel, a leader in the build and member of the Secwepemc Women’s Warrior Society.

The Secwepemc Nation, Women’s Warrior Society, Tiny House Warriors, and Greenpeace are partnering in an attempt to stop the completion of the extension of the pipeline. The opponents of the pipeline fear the results of a spill of the 900,000 barrels of diluted bitumen the pipeline would carry through Secwepemc land per day. “Our goal is to stop this pipeline. Our goal is to stop investors from investing in this pipeline,” Kanahus Manuel told the Vancouver Sun. “If I don’t stand up for my rights and our tis a Secwepemc woman and as a mother, I’m leaving this fight even greater for my children. I love my children so much that I’ll do whatever I can to protect their water and their salmon for all of their future.” 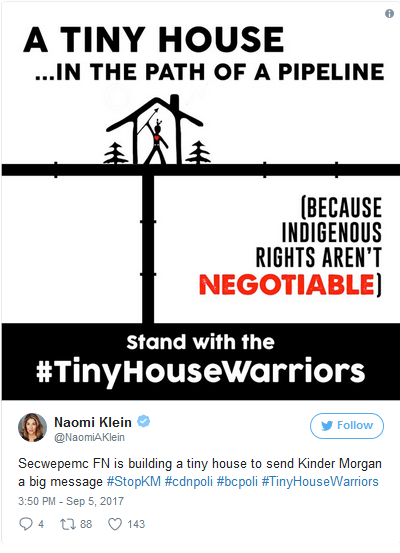 The idea for the tiny house warriors was in part inspired by Manuel’s experience living in a tiny house for three months during last year’s protests against the Dakota Access Pipeline. The plan is to have the wood houses available for members of the Secwepemc who are in need.  “A part of this tiny house project and movement is that we want to continue to have these, not just as a battle against the Kinder Morgan pipeline, but to help solve some of the housing crises that Indigenous people are facing,” she said.

Day 3 @ Tiny House Warriors: OUR LAND IS HOME, Unceded Secwepemc Territory We are defending our traditional foods and sacred Water by housing caretakers of our Secwepemc Nation in tiny houses to block the expansion of the Kinder Morgan Trans Mountain pipeline. Please join our Tiny House Warriors movement.

CBC reports that Canada’s Indigenous Services Minister, Jane Philpott, told the opposition that the decision on the pipeline is final and they cannot stop it. “We know there are a variety of different views on this,” Philpott said. “But this is something we’ve already done a tremendous [amount] of work on, recognizing the principles of consent, recognizing the rights of First Nations.“

Trans Mountain, a subsidiary of Kinder Morgan Canada, is expected to begin construction this month on the $7.4-billion expansion of the current pipeline, which carries crude oil from Alberta to B.C.’s southern coast. The Secwepemc are not sitting around and waiting for the government or the courts to reverse the decision – they are taking initiative and taking a stand. The Tiny House Warriors are hoping to inspire a movement of resistance similar to the Standing Rock Sioux’s battle against the DAPL. The Secwepemc are asking for help. Are you willing to answer the call?