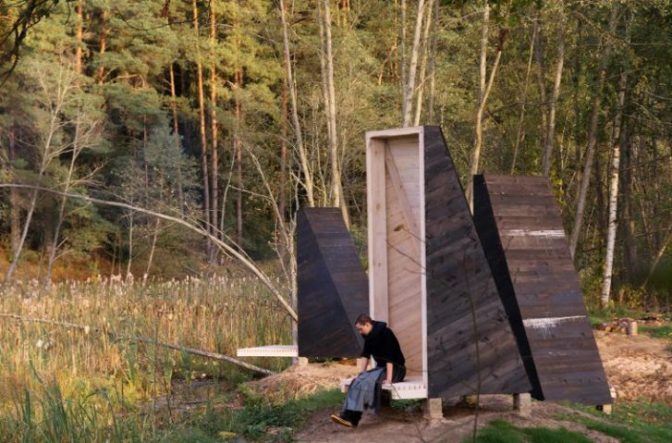 Imagine setting out for the day to explore the great outdoors free of technology, cars, crowds, conversation, work tasks, and more, only to stumble upon an alluring little hobbit-like house in the middle of the forest, just begging for you to slip inside and simply sit. It’s asking you to just be. It sounds like something out of a film, except there’s a real life project making a meditation fairytale come true.

Called Gapahuk, the project involves tiny meditation shelters within a forest garden that provide protection and a place to relax for hikers exploring the Lithuanian forests. These spaces offer the opportunity for people to find solitude within and harmony in the environment, and to reconnect with nature. A stone pathway winds throughout the garden, inspired by a Lithuanian fairytale about serpents.

The project, part of a larger Meditation Garden created by Bjørnådal Arkitektstudio, which won the American Architecture Prize 2016, was built during the Human Birdhouse Workshop in Lithuania last August. The team cleared out a portion of forest, shaped pathways in and around the garden, installed two fireplaces with sitting areas in front of the shelters, and added Holy stones to the site as totems of masculine and feminine origin, one of them symbolizing the head of a serpent. The other is used for sacrificing ceremonies . The amphitheater seating, constructed with logs hammered into the ground, was designed to be used for small performances or poetry evenings in the Meditation Garden.

The team chose the location for the Meditation Garden to encourage visitors to dive in to the mystical surrounding.

A press release for the project explains:

The site was next to the swamp. The swamp has low sounds, invisible creatures, and unknown depth, hidden passages used by Lithuanian witches in the past and by partisans during war. It attracts and frightens at the same time. The swamp is very different when fog is going down, and when sun shines upon it. To have the opportunity to sit and meditate in the shelter and to explore the swamp and the growing forest gives an unforgettable experience by connecting with the most magical landscape. Swamps as landscape are frequently used in Lithuanian fairytales, needless to say this fact added a unique mysterious feature on the whole project.

The project was created on the property of famous Lithuanian children books author, poet, and film/theatre director, Vytautas V. Landsbergis. The team aimed to design and build architecture that paid tribute to Constructive Shamanism.

Such a style brings together architects, builders, and spiritual practitioners to expose and dive deeper into the connections between humans and nature. The end result is a design that is dominated by Lithuanian mythology. Visitors of the Meditation Garden participate in spiritual ceremonies, and sing mantras around a bonfire.

The project was filled with mythological and folk images. Singing mantras and polyphonic songs around bonfire, participating in spiritual and in tea ceremonies were creating strong bonds between team members. Also, it endowed a meaningful embracement of Lithuanian innate connection with nature and folklore and brought the full load of mystical meaning to the project.

Wouldn’t it be awesome if we had these throughout parks and forests?