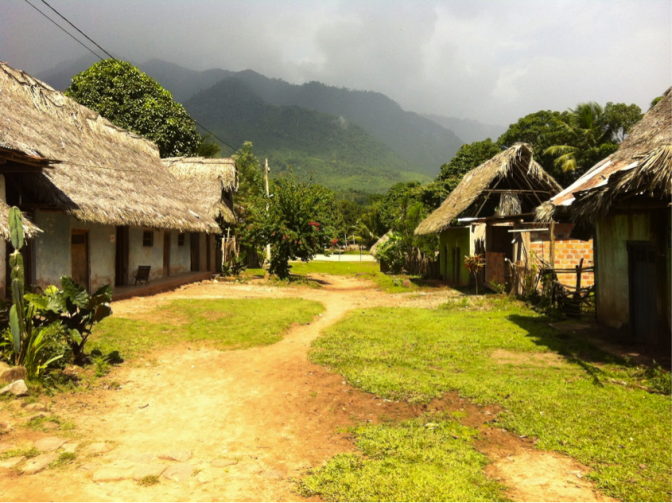 So we are now over 3 weeks without proper internet – I was able to get on line for the first 10 days or so on Jamil’s computer, but at no point as yet have I been able to get my own computer on line for more than an hour. It is this issue more than all others combined which represents the greatest threat to the success of the project. There is actually no reason whatsoever why it should be this way going forward – the internet provider now has solid infrastructure in the area and (following our purchase of some additional equipment) we should now be having a consistent 1mb service. But for the most ridiculous of reasons (like someone switching off the repeater in the middle of the jungle, as they did the other day) we are still sat here without the capacity to communicate with the world.

As it happens, having the last week a little freer to make our house into a home has been nice, albeit physically exhausting! And we are getting very close now to having some semblance of a comfortable home in which to birth the newest member of our family. In fact we are all actually feeling like everything is perfect just as it is – that this time away from the madness of the www is exactly what we (or rather this project) need right now…

Nonetheless everyone here is feeling the pinch of having no internet – the nature of our work means that there are pressures which build when we are not able to release the valves on a daily basis. We are promised that it will be back on today (but then that has been the promise for the last week), so perhaps by the next time I write things will have shifted.

Though I do now finally have an office set up (albeit somewhat overran by an oversized birthing pool)!

Anyhow, I do have some other interesting pieces of news to share – I had a delightful meeting the other day with a very wealthy gold-miner (who also happens to be the President of Peru’s best friend). It was a remarkable meeting – one of those moments that serve to embolden ones faith in humanity. He owns a 1,700 hectare gold mine – I say gold mine, it’s a mostly unmined piece of land with lots of gold in it – and he has agreed not to extract any further gold but rather leave it in situ and pledge it to our efforts as collateral for a new usury free currency (i.e. the New Earth Exchange).

It is amazing to now see wealthy industrialists folding in to the picture – and this is not some token gesture from a rich man – it was clear from the way the light shone in his eyes that he was himself going through an awakening; that he had heard the call of a new dawn, and was answering it in the only way he knew how. The significance of this man and this meeting cannot be overstated – he left us stating his firm conviction to draft and sign a document in which he pledges to cease all mining operations and commit, in perpetuity, the unmined assets to collateralise a sovereign usury-free currency. And as one wealthy industrialist folds in it will serve as the catalyst for more… a snowball effect is inevitable.

Spending more and more time with Jamil and Jasmin, I’m finally understanding why he has always been so firm in his conviction that the planetary transformation happens only by us focusing on one location. There has long been a great number of people with the same vision of world peace, prosperity and abundance – The NewEarth Project was in fact birthed with the principal intention of uniting these many people… So now that these transitional works with which we are all engaged are shifting out of the www and on to the Earth itself, it makes absolute sense that everyone who has united to serve that transition looks in one single direction; for the limited availability of the world’s greatest minds (like those who have united within the New Earth institute) to all focus their efforts on one singular project – only in this way do we stand any chance of manifesting something which surpasses each of our wildest imaginations with the limited resources we have.

Well that’s how Jamil sees it anyway, and I for one find it difficult to make any rational case to the contrary.

Having now defined the path forward (per my last blog post), it is likely that there will be less substantive news to share about the project itself over the next few weeks until we have the operation established. So I may reduce the frequency of these blogs to once-a-week. Either way, you will be the first to hear of all the coolest new developments…