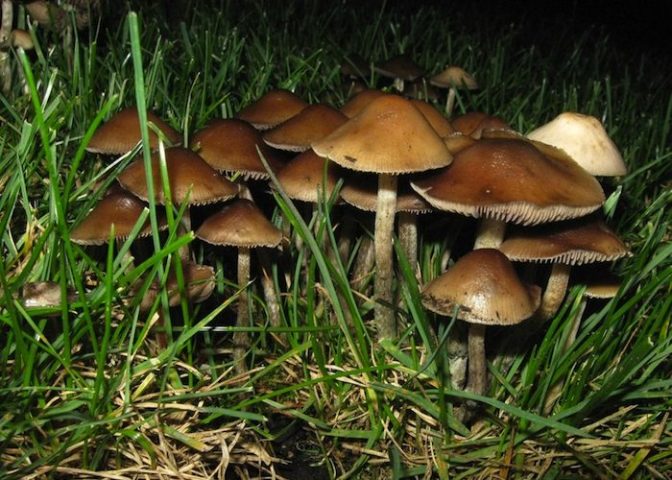 In the 1950s and ’60s, hallucinogenic drugs like psilocybin, which is found naturally in certain mushrooms, were often used in U.S. biomedical research and in psychotherapy practices. In 1966, however, the U.S. government declared the drugs illegal, halting American research into their potential therapeutic benefits.

But recent years have seen the the conversation stirred up in a less taboo way once again, with American researchers arguing that the prohibition is preventing them from discovering and taking advantage of treatments for psychiatric problems like depression, addiction, and post-traumatic stress disorder.

Two recently published studies revealed that a single moderate-to-large dose of psilocybin has the ability to provide significant and long-lasting relief from overwhelming distress. In fact, of 29 cancer patients who received psilocybin in a trial conducted at New York University’s Langone Medical Center, 20 rated it as “among the most meaningful” events of their life.

“This drug saved my life and changed my life,” explained Dinah Bazer, who was given a single dose of psilocybin at a New York treatment center in 2011.

The trials noted that psilocybin’s side effects were pretty tame, with only about 15% of subjects experiencing nausea or vomiting as a result of being administered a high dose of the drug, while roughly 1 in 3 of the subjects experienced impermanent psychological discomfort.

Octavian Mihai is another success story when it comes to psilocybin’s medicinal value. In 2013, after having just finished treatment for Stage 3 Hodgkin’s lymphoma,  he participated in a study looking at whether the drug can reduce anxiety and depression in cancer patients.

A New York Times article reported on his journey:

On a summer morning in 2013, Octavian Mihai entered a softly lit room furnished with a small statue of Buddha, a box of tissues and a single red rose. From an earthenware chalice, he swallowed a capsule of psilocybin, an ingredient found in hallucinogenic mushrooms.

Then he put on an eye mask and headphones and lay down on a couch. Soon, images flew by like shooting stars: a spinning world that looked like a blue-green chessboard; himself on a stretcher in front of a hospital; his parents, gazing at him with aching sadness as he reached out to them, suffused with childlike love.

Cancer-related psychological distress affects up to 40% of patients, and can be resistant to conventional therapy. Mihai’s anxiety arose after doctors told him he was finally in remission. He would continually touch the nodules on his neck where the cancer had been, and found himself afraid of traveling, as it would put him too far away from his oncologists. He ultimately turned to alcohol, drinking hard daily, which in turn jeopardized his already tender state of wellbeing.

He took the capsule and began tripping. After seeing himself on a hospital stretcher, he recalled: “I had an epiphany.”

“Why are you letting yourself be terrorized by cancer coming back? This is dumb. It’s in your power to get rid of the fear,” he told himself. “That’s when I saw black smoke rising from my body. And it felt great.”

Between the astounding results of the two trials, and stories like Mihai’s, it’s hard to ignore the necessity for fewer research restrictions. There is far too much potential for new scientific insights and clinical applications, and it’s being bogged down by government control that has been driven by unfounded fear.

Currently, psilocybin trials are underway in the United States and Europe for alcoholism, tobacco addiction, and treatment-resistant depression, and other hallucinogens are being studied for clinical application as well. In fact, recently the Food and Drug Administration granted a large-scale trial investigating MDMA for post-traumatic stress disorder.