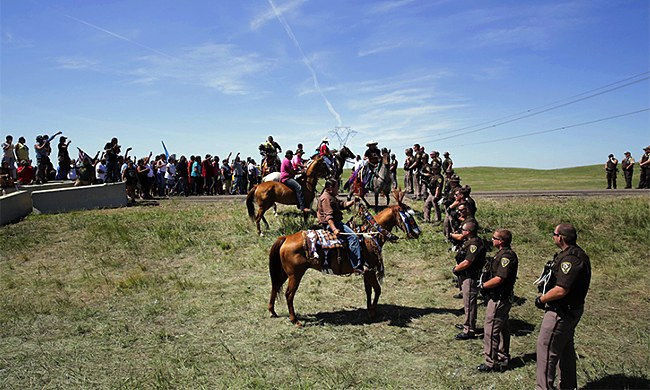 The ongoing protests against the Dakota Access Pipeline have put water protectors in some gruelling and dangerous situations, causing people around the world to put together ways to help those fighting against the unjust construction as opposed to simply sit on the sidelines, like Charmian Wright.

Upon hearing reports of horses getting hurt during the protests, Wright, a veterinarian with 30 years of experience, immediately chose to take action.”I am passionate about the issues that are being addressed at Standing Rock,” she said. “But when I saw videos of horses being injured, I knew I had to go there.”

The Standing Rock Sioux and their allies have not stopped fighting to protect the construction of the pipeline from going forward, as they believe it would intrude on Native American land, and that a leak could damage the contamination of fresh water.

“I just think everybody needs to help and this was the best way that I could,” Wright said. When she got to North Dakota, she discovered that the horses at camp were well taken care of, but she was unaware of any other professional veterinarians there. She took action by treating some horses for injuries that happened to them in “the rough and tumble of the protests.” Her biggest goal, however, was to educate horse owners and riders about how to treat emergency injuries, or be able to evaluate potential illness.

She also “discussed nutrition and bandaging techniques, taught some people how to suture wounds, and put together emergency medical kits for horse owners.”

“I taught them how to do an in-depth physical exam, including the use of a stethoscope, how to assess for lameness, how to body-score for weight, and how to examine teeth,” Wright said. “We discussed how to assess different types of injuries and how they are treated. I showed them the uses of different medications, such as antibiotics for infection and anti-inflammatories for pain and colic.”

Wright also discussed proper nutrition tips, bandaging techniques, and showed people how to correctly suture wounds, and put together emergency medical kits for horse owners. She made it clear, however, that she only instructed people to care for their own horses, as managing veterinary treatment for another person’s horse could be taken as practicing medicine without a license.

Wright runs an equine practice in Park City, Utah, and posted on Facebook to find out what the Standing Rock water protectors needed, and within hours a horse caretaker at the Oceti Sakowin Camp had called her. This sparked Wright’s decision to make the 900-mile drive to Cannonball, North Dakota, in early November.

“The horses on site are very important for morale and for healing of the humans,” Wright proclaimed on a GoFundMe page dedicated to raising money for veterinary supplies. The Standing Rock Sioux tribe holds their horses near and dear, considering them an essential part of their culture. At DAPL, they have proven to be an ongoing presence during the protests.

Wright has now returned to Utah, but she has continued the GoFundMe account to ensure the horses at Standing Rock get the medical needs they require to sustain harsh conditions at the protest site. Wright has announced her continuation with helping the water protectors and their horses despite being far away, as she will remain available for long-distance consultations. She said if needed, she may return to the site.