Siberia’s Melting ‘Doorway To The Underworld’ Is Exposing Ancient Forests 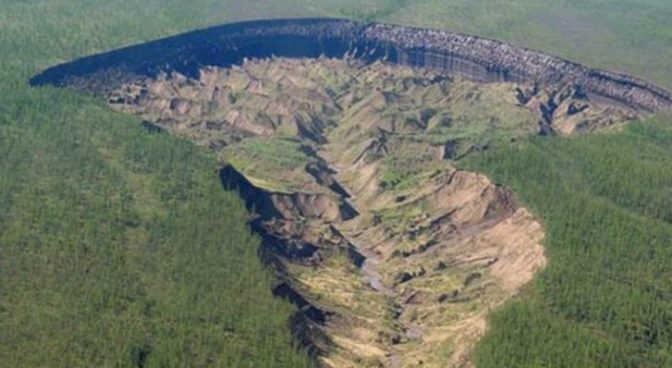 The Siberian permafrost has been a massive freezer for everything buried within it for hundreds of thousands of years. But global warming has provoked an alarming defrost of the tundra.

“Permafrost is a silent ticking time bomb,” explains Robert Spencer, an environmental scientist at Florida State University, because as it thaws, the dirt can release bacteria, carbon, methane, viruses, and more.

Huge holes have even begun appearing seemingly out of the blue, and in other places, the tundra is bubbling beneath people’s feet.

Now, new research has revealed that one of the permafrost’s biggest craters in the region, which is referred to by the local Yakutian people as the “doorway to the underworld”, is growing so quickly that it’s exposing forests, carcasses, and up to 200,000 years of historical climate records. It’s called the Batagaika crater, which is a “megaslump” or “thermokarst.”

The largest of its kind, coming in at almost 0.6 miles long and 282 feet deep, it seems the crater is expanding each day. The team even suggests that the side wall of the crater will reach a neighbouring valley in just a few months due to temperatures heating up in the Northern Hemisphere, which could result in additional land collapse.

“On average over many years, we have seen that there’s not so much acceleration or deceleration of these rates, it’s continuously growing,” explains Frank Günther from the Alfred Wegener Institute in Germany. “And continuous growth means that the crater gets deeper and deeper every year.”

The hole will only get deeper and larger, which will bring to the surface carbon stores that have been trapped for thousands of years.

“Global estimations of carbon stored in permafrost is [the] same amount as what’s in the atmosphere,” Günther said.

At the very least, however, the crater could reveal a slew of important climate data, which, according to lead researcher Julian Murton from the University of Sussex, could help us to understand how the climate of Siberia changed in the past, and how it will shift over the coming years. Such insight may help us to better prepare for when the permafrost melts again, which last occurred around 10,000 years ago, when the Earth transitioned out of its last Ice Age.

“The Batagaika site contains a remarkably thick sequence of permafrost deposits, which include two wood-rich layers interpreted as forest beds that indicate past climates about as warm or warmer than today’s climate,” Murton explains.

“The upper forest bed overlies an old land surface that was eroded, probably when permafrost thawed in a past episode of climate warming.”

But there’s more research that needs to be done, Murton says, as the exact dates of the sediment that have been exposed in the crater still aren’t known.

Murton is devising a plan at the moment to drill bore holes in the region in order to examine additional sediment in hopes of getting a better understanding of what happened in the past.