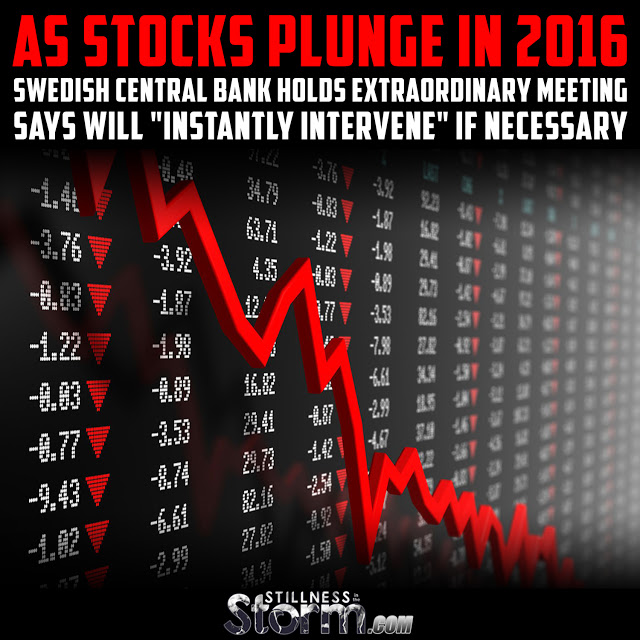 Markets have started 2016 with a healthy dose of turmoil, and so many were wondering how long – and who – would be the first central bank to intervene in either directly or verbally in markets.

Moments ago we go the answer when Sweden’s Riksbank announced it has held an extraordinary monetary policy meeting in which it took the decision required to be able to “instantly intervene on the foreign exchange market if necessary, as a complementary monetary policy measure, to safeguard the rise in inflation.”
This is what else it said:

The decision involves the Executive Board entrusting to the Governor, together with the First Deputy Governor, the task of deciding the details with regard to possible interventions.

During 2015, the Riksbank has cut the repo rate to –0.35 per cent, adjusted the repo-rate path downwards and purchased large amounts of government bonds and also announced additional purchases during the first half of 2016. However, since the last monetary policy meeting in mid-December, the Swedish krona has appreciated against most other currencies. If this develop-ment were to continue, it could jeopardise the ongoing upturn in inflation.

The Riksbank has no target for the exchange rate, but the krona’s value in relation to other currencies is an important factor in the inflation forecast. Inflation is rising but has been under the target of 2 per cent for a relatively long period of time. To safeguard the role of the inflation target as benchmark in price-setting and wage formation, it is therefore important that inflation continues to rise.

The Riksbank still maintains a high level of preparedness to take other monetary policy measures in addition to the currency interventions if this is necessary for inflation to stabilise around 2 per cent. The repo rate could be cut further, the securities purchases could be extended and the Riksbank could lend money to companies via the banks.

Deputy Governor Martin Flodén entered a reservation against the decision. He thought it appropriate to wait before implementing any further monetary policy stimulation and did not consider currency interventions to be a suitable tool to make monetary policy more expansionary in the current situation.

And now, we sit back and wait for some of the “real” central banks to follow suit because this aggression against manipulated asset prices will surely not stand.
Source:
http://www.zerohedge.com/news/2016-01-04/swedish-central-bank-holds-extraordinary-meeting-says-will-instantly-intervene-fx-ma
Found @ Manifest Destiny Triforce
Share this
0 likes
Related Articles
0 Comments