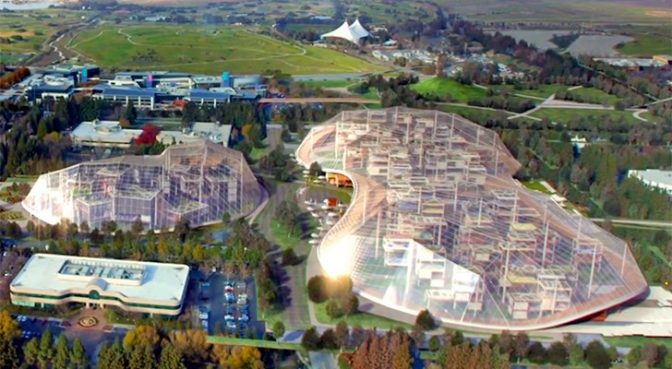 (Editor’s Note: New Earth Media does not necessarily endorse Google, as there are many questions about whether they are working with the NSA- nevertherless, were glad to see this sort of sustainable architecture getting more exposure and hope you can appreciate it for what it’s worth.)

Google has just revealed plans for their glorious new headquarters in Mountainview, California. Although still preliminary, the “imagineers” behind the incredible endeavor have two of the world’s best architects heading the project, Bjarke Ingels (of BIG) and Thomas Heatherwick.

The mission was simple: to create an innovative space that would inspire Google employees to continue to engineer, invent, and make ideas happen.

But the outcome was far from simple, quickly becoming a breathtaking, eco-Utopian kingdom.

“When you visit the Google campus, there’s lots of trees, but there’s a constant undermining of that by the road system and the infrastructure required for all of those cars. And it just feels like the trees are street furniture,” said Heatherwick.

“Everything has turned into parking lots. We’re trying to reverse this process and recreated some of the natural qualities that have been there in the first place” added Ingels.

Plans for the headquarters focus on the sustainability and protection of the natural wildlife habitat, which will see waterways, lakes, bridges, bike paths, trees and a plethora of greenery assimilated all throughout a massive bio-dome. The roof will be an ultra-thin, transparent mesh that will allow plenty of natural light, blurring the line between outside and inside.

“It’s interesting to try and look at how you can really augment or turn the dial up more on nature at the same time looking to really protect the land use.” said Heatherwick. “We really wanted to create communities with bikes and pedestrians, where people don’t have to worry about cars passing by at 70 miles per hour.”

But perhaps the most incredible aspect of the project is that the headquarters will apparently be flexible and future-proof. “Instead of constructing immoveable concrete buildings, we’ll create lightweight block-like structures which can be moved around easily as we invest in new product areas,” said David Radcliffe, the firm’s Vice President of Real Estate. “How will we work 5 years from now, how will we work 15-20 years from now? We don’t really know what it’s going to be but we just know that it’s going to have to be an incredibly flexible space to work with.”

As always, sustainability is a major aspect to modern-day innovation, something the entire engineer team is remembering as the foundation for this new complex.

“We have a duty to reflect in the physical environment the values that have been manifested in the innovations that have come out of this part of California. Humanistic spirit is something we feel is very important to embody in what we’ve built, and so that’s shared between all of us, and is exciting and driving us, and will be in its way revolutionary,” Heatherwick finished, swivelling around on a oddly shaped chair.

What are your thoughts on this project? Share with us below!