Study Places Bonobos With A Fascinating Decision: Eat Their Small Portion Of Food Or Share It With A Hungry Stranger 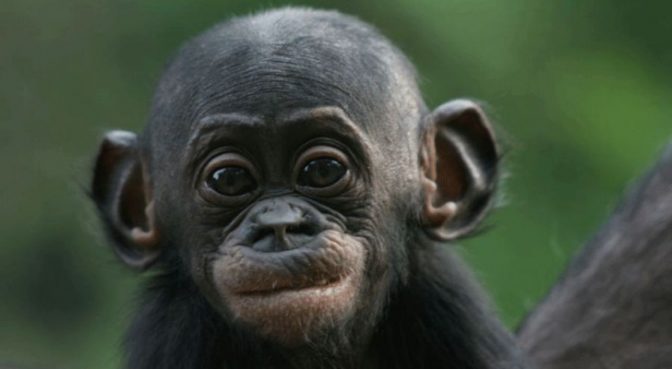 Bonobos Are Teaching Scientists About The Evolution Of Kindness

Man’s altruistic nature is a unique characteristic that has for the longest time separated us from the majority of the dog-eat-dog species on our planet. Kindness, empathy and compassion are among these distinctive qualities.

But an endangered group of Great Apes is now revealing that it is not just man who carries these altruistic attributes. National Geographic recently released an article discussing how these distant relatives are helping scientists to understand more about the evolution of our compassionate human virtues.

Evolutionary anthropologists Brian Hare and Jungzhi Tan of Duke University have been studying Bonobos at the Lola Ya Bonobo Sanctuary in Kinshasa, the Democratic Republic of the Congo (DRC). Many of the Bonobos stationed there are orphans that were rescued from the cruel reality of human exploitation.

Unlike other nonhuman primates—including our other closest living relatives, chimpanzees—peace-loving Bonobos seem to tolerate strangers, share resources with random Bonobos, and exhibit a form of empathy called contagious yawning.

These findings may help to solve the long-standing evolutionary puzzle of why humans show kind or helpful behavior to other humans beyond their immediate family or group: it could have a biological basis.

“Certainly culture and education play an important role in the development of human altruism, but the Bonobo finding tells us that even the most extreme form of human tolerance and altruism is in part driven by our genes,” Tan said to National Geographic.

In a remarkable study to test the Bonobos’ willingness to share, scientists studied 14 different Bonobos by placing each one in a cage setup which featured two separate cages on either side of the subject’s central cage. In one of these side cages was a known group member, and in the other was a complete stranger. The Bonobo with the limited amount of food had the option of eating it all to their self, or to share by opening its neighbor’s cage and inviting them in.

So what did the Bonobos decide? 9 out of 14 Bonobos chose to share with the stranger first.

The study revealed that Bonobos are willing to sacrifice their food even when they themselves may not receive any benefit from the act; it could even mean that these Apes would suffer themselves.

In another experiment, Hare and Tan discovered that Bonobos also have a human-like habit of “catching” yawns from strangers—again, the only nonhuman primate known to do this. This notion showcases another expression of empathy.

Irony plays a role in this story, however, seeing that fewer than 20,000 Bonobos are now thought to remain in the Congo Basin  due to the insensible activities of, you guessed it, humans. The International Union for Conservation of Nature lists the species as endangered.

Sadly, illegal Ape trade is a growing industry between Africa and Asia. Millions of Chinese nationals are currently present in Africa, perpetuating the slave trade of Apes for various human activities including circuses, zoos and personal consumption. Brian Hare states that animals are being sold for $50,000 to $300,000 each.

“We have seen growing reports that Chinese consume bushmeat in Africa, keep pet chimps in Africa, and also there is this illegal ape trade,” Tan said.

Terese Hart, who is based in central DRC and is director of the TL2 Project for the Lukuru Wildlife Research Foundation, said in an email that while there has been demand for Bonobos from Asia, the major threat is the local bushmeat market. “A dead Bonobo sells for $50 and can feed a large family for a several days,” she said.

“Although Lola Ya Bonobo [where Hare and Tan carried out their studies] receives orphaned young, in most cases the mother is killed and the young dies or is also killed,” Hart said.

Her view is echoed by Jo Thompson, executive director of the Lukuru Wildlife Research Foundation, based in Kinshasa. “The pervasive threat across the whole of the wild population is the demand for bushmeat,” Thompson said.

Learning About The Amazing Qualities Of Bonobos For Conservation Efforts

Hare and Tan are working hard to spread awareness about the remarkable profile of these compassionate primates with hopes that their efforts will inspire other countries like China to really think about their decision to eat exotic animals.  They will be attending Duke Kunshan University this fall to promote conservation efforts.

The livestock industries are having a major detrimental impact on our planet. Our decision to eat and exploit other animals is not only wiping out entire species, but it is also destroying our forests, land, air and water. The demand is ever-increasing and the supply is limited. Simply put, it is not a sustainable option, and we are running out of time.

Switching to a plant based diet will not only benefit your overall health, but it will make a positive impact on our planet. Educate yourself today and help spread the awareness around this imperative issue!