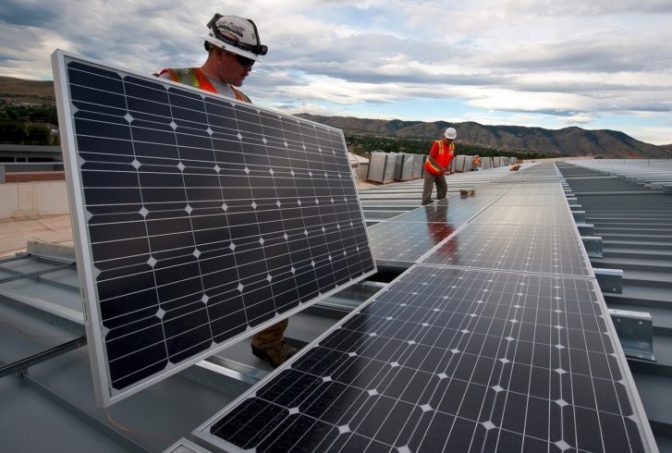 A new U.S. Energy and Employment Report is providing yet another indication that our energy paradigm is rapidly shifting away from fossil fuels. The most promise for jobs lies in clean energy, with solar jobs in particular rising at a tremendous rate.

The U.S. Dept. of Energy’s second annual report found that, in 2016, solar employment was almost double that of fossil fuel employment in the Electric Power Generation sector.

The total number of jobs in the Traditional Energy and Efficiency sectors was 6.4 million for 2016, which includes: 1) electric power generation and fuels, 2) transmission, distribution and storage, 3) energy efficiency, and 4) motor vehicles.

More than 300,000 new jobs were added across the entire spectrum, making up about 14 percent of total jobs created in the country. The report notes that the “solar workforce increased by 25% in 2016, while wind employment increased by 32%.”

READ MORE:  The World Can be a Cruel Place, But Thanks to This Loving Group of Women, Today It’s not so Cruel

These revealing job numbers mirror dramatic shifts going on in the sources for electricity generation, driven by crashing solar prices and the fracking boom which led to a glut of natural gas. Cheap solar and natural gas prices – not government policy – have been driving coal out of the market since 2006.

The report comes on the heels of news that unsubsidized solar is now cheaper than fossil fuels in many countries for large-scale electricity generation. Solar prices will continue dropping, and within a decade or two solar energy will be half the cost of coal or natural gas.

This transition is being driven by market forces, as Bloomberg highlighted in late 2015. Their analysis shows that within 25 years, solar will be the primary electricity source as it outcompetes natural gas and coal on every level.

Speaking of subsidies, the U.S. fossil fuels receive about $37 billion a year in subsidies. The only industry that will be reliant on government to prop it up in the near future is the fossil fuel industry. The cost of fossil fuels also does not include the cost to human health from pollution, estimated at $75 billion per year, and the cost of military protection of overseas oil, which amounts to about $30 billion per year.

According to the DOE report, three sources of energy made up 93 percent of new additions to the energy grid in 2016, with solar coming first at 9.5 GW. Natural gas added 8 GW and wind energy added 6.8 GW).

READ MORE:  No Matter Who Wins the Election, The People Who Are Not Elected Will Stay in Control

World markets have firmly indicated that the future is clean energy, with trillions of dollars in investments coming over the next few decades. The new jobs report tells us that solar and wind energy provide the best opportunity for job growth in the U.S.

China got the message, and just announced it will invest $361 billion over the next three years in clean energy, marking a major turn away from coal.

President Trump has repeatedly called for using his power to ‘bring back the coal industry,’ but doing so would be in complete contravention of market forces and would be a great disservice to Americans looking for jobs.

If the new administration and Congress continue with their obsession over fossil fuels – and the antipathy toward clean energy – it could mean America loses out in the massive economic opportunity that is clean energy.